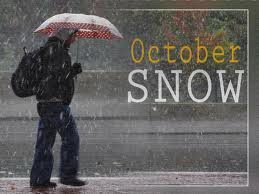 This past weekend I visited some people I love, in a city I love, even though the weather forecasters were predicting snowfall in October.  Despite the drumbeat of weather predictions, I didn’t believe it would actually happen.  I thought it might be cold enough to snow but I never thought it would actually stick to the streets and accumulate.