I’d like to give a big shout out to the New York Giants who yesterday defeated the San Francisco 49ers and now are going to the Super Bowl!!!!!
I know my husband is up there in the big blue sky with a big smile on his face, celebrating in his own heavenly way.  It’s funny how many text messages I received while watching the game commenting about his supposed involvement with the Giants as though he could make the game go one way or the other.  But once the championship game went into overtime, even I was shouting for him to do something to help the Giants win.
We all have our own ways of staying connected to our loved ones who have died and I will always connect the Giants to my husband.  There are times when I turn a Giants football game on just to bring back those memories of him shouting at the television and giving his own commentary.  He was a hardcore fan who took each game personally and when they lost there was nothing right with the world.
That’s why I know that he is very happy right now.   My husband would always say that the Giants never made it easy to be a fan and yesterday’s game proved his point.  The score was tied 17-17 as they went into overtime.  You wanted to watch but you couldn’t watch.  The Super Bowl was on the line.  Then Lawrence Tynes kicked a 31-yard field goal almost eight minutes into overtime to give the Giants a 20-17 victory over the San Francisco 49ers in the N.F.C. Championship game.
Go Blue!!!  Now we go to the Super Bowl to defeat the New England Patriots, a rematch of the Super Bowl four years ago.  As my husband would say, “May the best team win and you know what I mean!” 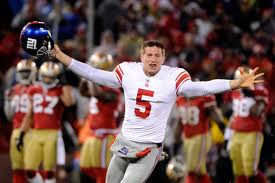