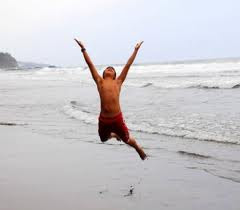 Longer, warmer days are making me yearn for a simpler life.

Lighter clothes and lighter food are definitely the way to go.  There’s something about the change in seasons that makes me want to lighten my material load here on earth and get about to the de-cluttering of my nest.  This past weekend I was cleaning the house and I started pulling stuff out of my closet and making piles of “keep,” “donate” or “give away.”

Getting  rid of things you never use or wear feels so great!  But de-cluttering isn’t just about your material things.

You can de-clutter your thoughts or your attitude.  What a fantastic concept!  Here’s a story I found on mariashriver.com that got me going into throw away mode and I thought you might like it too:

An Easy Way to Achieve Peace of Mind

Whether I’m working with a Hollywood celebrity, consulting with a spiritual leader, or speaking to congregants at Celebration Church in Portland, Oregon, I always encounter the same question: How does one achieve peace of mind?

I believe I am getting closer to the answer, and it begins with getting rid of excess “stuff” in one’s life — whether it’s material things, unfulfilling activities and people, or useless information.

If you try to only fill your life with things, people, and activities that feed your spirit, there will be a lot less junk standing between you and peace of mind. Now I travel the country motivating and inspiring people to do this.

My own journey toward peace of mind began on April 3, 1998, at 3 am. It was possibly the best day of my life. My wife performed the miraculous that day: the act of giving birth. I made a solemn promise to that 8.3-pound boy the first time I laid eyes on him. I would never parent out of anger.

And, I must say, I have done well living up to my promise. Except on one day, possibly the worst day of my life, six years later.

The first thing I remember that morning is all the shampoos. Why so many bottles? What should I use? Maybe I could use a shower gel for my hair and body! Radical. And then came the hair gels, lotions, and toothbrushes (Which one is mine?).

Upon opening my closet door, I was overcome with a full-blown episode of “apparel-yzation,” which is the act of staring, immobile, into one’s bulging closet shackled by the thought “What to wear?” Which is sometimes followed by the nutty notion, “I have nothing to wear.”

The encounters with chaos continued. There were pieces of mail and other random papers on the kitchen table and counters, enough cereal boxes to open my own Kellogg’s outlet store, and my boys playing with the latest version of Xbox something or other while the outdated versions lay in heaps, half in, half out of drawers.

I tried to simultaneously pick up after them and get them ready for school.

It all came to a head when I opened the door to my son’s room to see before me what looked like a testing ground for nuclear weapons. I was late for an appointment, and my son had already missed the bus. He was supposed to be in his room getting ready. “CJ, where are you?” There was no reply. This time I yelled, “CJ, WHERE ARE YOU?”

A squeak came from behind his closet door, “I’m in here, Daddy.” I opened the door to find him in a sitting fetal position, overwhelmed, surrounded by refuse from the ghost of Christmas past. He explained, “I’ve been looking everywhere, but I can’t find my pants.” A tear rolled down his cheek.

But I couldn’t see it. I was blind, turning green like the Incredible Hulk as I yelled, “GET UP NOW, RIGHT NOW! I’M LATE BECAUSE YOU CAN’T FIND PANTS? GIVE ME A BREAK! THIS IS RIDICULOUS.”

We drove to his school in total silence. That had never happened before. The rest of the day I felt like a lowly worm at the bottom of a compost heap. What had happened? That was not me.

A few weeks later I shared my frustration with a good friend, Dr. Harold Bloomfield. I told him about all the stuff, from the shampoos to the floor of my son’s room, and how it all seemed to pile up in my mind, creating an overload that turned me into a rageaholic monster. “What is it?” I said.

His reply changed my life. “Oh” he uttered, shaking his head, “you’re talking about Chotchky.”  It’s an old Yiddish term. I’ve come to understand it as anything we have in excess that intrudes, clutters, or distracts us from our soul’s highest purpose. Chotchky isn’t just clutter. It can also be unsupportive people, too much technology, unhealthy food, unwanted gifts, and regrettable decisions, among them. But the junk in your house is the easiest kind of Chotchky to identify.

What my son and I were experiencing was the “Chotchky Effect.” Too much Chotchky can leave us stressed out, irritable, and confused. No one wants to be on the receiving end of the Chotchky Effect.

You see, I wasn’t angry at my son. In fact, we are almost never angry for the reasons we think we are. There is usually something behind the anger. Often, if we’re willing to look close enough, we will recognize that “something” as some form of Chotchky.The anger directed at my son started with an excess of shampoos and built from there.

Besides, who bought him the Xbox’s, the toys, and all those clothes that overwhelmed him and me? Hmmm.Think of your conscious mind as a sacred shelf. It can only hold so much before it starts to bend.Everything we surround ourselves with, that we come into contact with, is placed on our sacred shelf.

One shampoo is enough. The other nine in the shower that day were Chotchky and they took up space on my sacred shelf. By the time I got to my son’s room, the weight of the Chotchky Effect was taking its toll. My sacred shelf snapped.Give yourself and the ones you love a blessed gift. Eliminate all the Chotchky in your life, one room at a time, and donate it, recycle it, or throw it away.

Doing so will lighten your load, unburden your soul, and give you peace of mind.

********
Barry Dennis is an internationally known inspirational speaker and spiritual teacher. His new book is The Chotchky Clallenge: Clear the Clutter from Your Home, Heart, and Mind…and Discover the True Treasure of Your Soul (Hay House, April 2012). Learn more at www.BarryADennis.com.

Lessons from the Spin Cycle

Lazing In A Summer Hammock

Listening Can Be Powerful