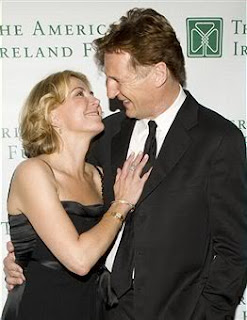 I am always on the look-out for stories where people open up and reveal how they handle their feelings of grief.  As you know, the subject of grief is not considered a mainstream topic of conversation because it is such an emotional minefield.  To do so means revealing deep pain and vulnerability; which is hard for anyone to do; but especially hard if you are a celebrity or a public official.

It can be almost impossible to get men to talk about how they feel about most things — unless it’s a sports team or a political party — so it was a wonderful surprise this week when actor Liam Neeson was in the news because he talked to Esquire magazine about the death of his wife actress Natasha Richardson in 2009 at the age of 45.

Neeson deserves a lot of credit for talking candidly to a men’s magazine about how he survived her death that was caused by a skiing accident in Canada.  Just by the fact that it took him almost two years to talk about this tragic event shows how hard it can be to adjust to the death of a loved one along with the added responsibility of becoming the sole parent of two young sons.

Neeson’s comments go a long way in showing that healing after a traumatic loss comes slowly  and that while he is trying to get on with his life he recognizes the benefits of talking about what he and he sons dealt with after Natasha Richardson’s sudden death.  He told Esquire magazine that initially you think that you know what grieving will be, how it will feel, but then it turns out to be something entirely different.  Doesn’t that sound familiar?

In case you missed it, here are a few excerpts from Neeson’s Esquire  magazine interview:

— “It’s easy enough to plan jobs, to plan a lot of works.  That’s effective.  But that’s the weird thing about grief.  You can’t prepare for it.  You think you’re gonna cry and get it over with.  You make those plans, but they never work.”

Read All About It

The Kindness of Nurses