I am going to get right to the point today:  Thank you, Thank you, Thank you to the man at the BP gas station last night who helped me with the air pressure in my tires.
I was driving home from work last night and suddenly a menancing light came on in the dashboard.  This is what the symbol looked like: 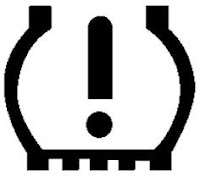 Don’t you hate it when that happens?  Plus, I was really in a panic because I didn’t know what the symbol meant when it appeared on my car’s dashboard.  Was it something big?  Something small?  What the Hell?
I pulled over to the side of the road and quickly prayed that the problem was something small and inexpensive.  Once I read the car manuel and found the symbol, I discovered that it came on because the air pressure in  my tires was low.
Thank God it wasn’t something bigger like the transmission or an engine belt.
You’re probably thinking I should have kept driving and gone home.  After all, it was only the air pressure in my tires but I couldn’t do that.  The warning light would be a constant reminder to me that something was wrong and eventually I would have to deal with it so I might as well do it now.  I found myself mentally talking to my husband because when he was alive he used to know all about the cars.  Oh well. . .
I pulled into the first gas station and asked the guy behind the counter if someone could check the pressure on my car tires.  “Nope,” he said, “Gotta come back tomorrow.  Nobody’s here right now and I’m not going to do it because I’m busy working this cash register.”  Greattttttt.
On my way back to my car I noticed that this gas station charged one dollar, that’s right, one dollar, for air coming out of the air pump.  What a rip-off!  By the way, when did gas stations start charging for air?
Back in my car, I am searching for another gas station.  BINGO!!  The next one not only has free air but Mr. Car Rescue Man is there kneeling on the pavement next to his car checking his own air pressure.  He didn’t work for the gas station and he kindly checked and rechecked the air pressure in my tires until all four were correct!!!!!!  What an angel!!
Thank you again Mr. Car Rescue Man!!  You are the best and the world needs more guys exactly like you!!!!  Thank you so much!!
Share this post: