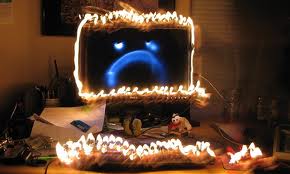 Yesterday was a day from electronic hell.  Every time I turned around some piece of equipment in my office needed attention.
Has this ever happened to you?  Don’t you just hate it when computers, cell phones, blackberries and xerox machines misbehave?
I don’t consider myself a tekie kind of person at all and I don’t feel any desire to stand in line when I know Apple is going to be selling a new iPhone or a new iPad.  I am open to learning new things about electronic devices but I’m not very happy about it.  I’m of the mind that if it’s working and it’s doing everything that you want it to why does it have to change?
It just doesn’t make sense to me how a computer can be working fine — receiving and sending emails, printing out documents and all the other things that computers do — and then the next day you walk in, log on and your tool bars or your favorite icon are missing from the computer screen.  I usually know how to figure some of this out myself but not always.
My computer did not have a monopoly on electronic mischief.  The charger to someone else’s Blackberry wouldn’t work so I had to go to Radio Shack to see if they had another one.  Thank goodness Radio Shack had them in stock but I also needed a converter so I could charge a cellphone to be used overseas.  Of course, Radio Shack was out of those and wouldn’t get them in again for weeks.  Try CVS, the Radio Shack guy said.  So I did.  Wouldn’t you know it?  CVS had the converters and they only cost $3.99.  Yea!!!!
I’m the kind of person who turns electronic and appliances off because I think they need to “rest.”  I don’t think that’s such a crazy idea.  When I’ve been using the xerox machine and copying reams of documents, I can feel the machine starting to warm up.  Don’t you think it’s the machine’s way of telling me it needs to take a break?  I do!  Sometimes I even talk to the xerox machine as in, “Please don’t jam.  This is a really important job!”
It’s the little things in life that can make you happy right?  I like to think that my computer and cell phone and I are all part of the same team, working together to get things done, not falling apart and needing attention.
So listen up all you electronics — behave yourselves and do what you are supposed to do.  PLEASE?????!!!!!!
Share this post: