Comedian Billy Crystal’s tribute to Robin Williams during Monday night’s Emmy Awards was moving because it stripped away the glitter and glitz and glamour of Hollywood and spoke of something essential: the gift of friendship.

Crystal talked about what a great friend Robin Williams was to him and to try and imagine the two of them just hanging out together as two down-to-earth dudes was special in itself.  We see comedians and actors performing together all the time and they look like they are enjoying each other but we really don’t know if it’s genuine.  It could be an act.  We don’t even know if they like each other.

Not so with Billy Crystal and Robin Williams.  They really were buddies.  They truly liked and supported each other.

Laughing or crying, you don’t have to explain much when you around good friends for they always seem to innately know what makes you tick, what helps you heal, and this was true even for two high profile, multi-talented, award-winning celebrity comedians.  “As genius as he was on stage, he was the greatest friend you could imagine,” Crystal said. “It’s very hard to talk about him in the past, he was so present in all our lives … for 40 years, he was the brightest star in the comedy galaxy.” 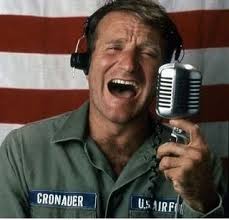 And then there’s the laughing.  Robin Williams made us laugh the kind of laughing that you do when you are caught off guard.  You can’t catch your breath and if you have anything in your mouth you might spit it out while listening to him.  Robin Williams totally fascinated us with his incredible imagination and boundless creativity because you had no idea where he was taking you or where you would end up.

But underneath all of that funny business was an inner sadness and his suicide earlier this month was truly a shock.

In case you missed it or perhaps you want to watch it again, here is the link to Billy Crystal’s heartfelt tribute to his great friend, Robin Williams: