If you Google the word resilient, you will find yourself reading about Rep. Gabrielle Giffords, D-AZ.

Resilience is the ability to recover from a crisis, a dramatic life change or even failure.  Some people are born with resilience and others develop it.

Resilience is when life hands you an awful situation and you turn it into an opportunity to learn or develop something about yourself.

Resilience is digging down deep within ourselves and finding the resources to cope with a changed life.

To me, this is the essence of Gabby Giffords.

One year ago tomorrow, Giffords was speaking at a constituent event in Tucson, AZ, when 22-year-old Jared Loughner shot her in the head and then continued to shoot 18 others in the crowd.  Six people died, including a nine-year-old girl and a federal judge.

Giffords has spent the past year on an unbelievable mental and physical journey learning again how to talk, walk and survive the emotional trauma of being shot at close range.  I can’t imagine how hard and frustrating it has been for her to get to where she is today.  And she still has work in front of her.  But when you watch her on television, you have no sense of any of the difficulty she has experienced.  I think she has the most peaceful smile and I am inspired by her determination.

With her husband, retired astronaut Mark Kelly, the two make a forbidable team.  They are scheduled to mark the one-year anniversary of the shooting during a candlelight vigil on Sunday, January 8 at the University of Arizona.  If you want to know what true love is then read this post from Maria Shriver’s blog written by Mark Kelly about what he has learned from his incredible wife: 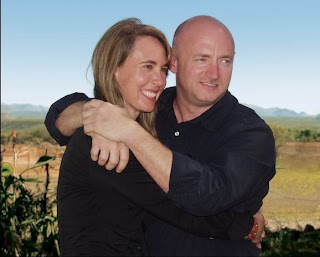 Gabby: A Story of Courage and Hope

By Mark Kelly
Our spouses are often our teachers, guiding us in ways that may be clear only in retrospect.
I have been struck by this realization again and again in the year since my wife, Gabby, was almost killed in an assassination attempt. As she struggled to regain her ability to speak, I became her student, remembering vital things she taught me years ago.
At first, she couldn’t say anything at all, which left her scared and stuck inside herself. I remember one particularly rough day, about a month after the shooting, when I came into Gabby’s room and found her sitting in her wheelchair, tears running down her face. She was hyperventilating, absolutely panicked.
Through her tears, Gabby motioned with her left hand, waving it by her mouth. It didn’t take me long to figure out what was wrong. She had tried to speak and no words came out. She was making some sounds, consonants and vowels, but no words. She cried and I cried with her. All I could do was reassure her. “It’ll get better,” I said. “I promise you.”
By mid-February 2011, six weeks after the shooting, she had begun formulating words, but they were often delivered haltingly or incorrectly. She got stuck on random words. No matter what she meant to say, the same word, “chicken,” often came out in a burst: “Chicken, chicken, chicken.”
For Gabby, it was terribly frustrating. And for those of us who loved her, it was dispiriting to see a woman who had been so articulate reduced to grasping for syllables. But in my role as a caregiver, I found myself buoyed by recalling Gabby’s voice from earlier times. I’d recommend that any spouse dealing with a traumatic situation reach back into the past for a meaningful memory. It can offer perspective, comfort – and a way forward.
In my case, I had never been a patient man. I’d always been a go-getter, focused on “the urgency of now.” By contrast, Gabby knew well the value of patience. As a state senator and then a U.S. congresswoman, she’d let her constituents in Arizona say whatever they needed to say without interrupting them. She interacted easily with everyone, young and old, able-bodied and infirm.
After she was injured, friends and family would often interrupt her, saying the words they thought she meant to say. They were trying to help, but I saw this only added to Gabby’s sense of powerlessness.
And so it was helpful to me to think back to a day in 2006, after my second space flight as an astronaut, when Gabby and I got to have lunch with the legendary British astrophysicist Stephen Hawking. Dr. Hawking is paralyzed due to a form of Lou Gehrig’s disease, and it takes him an excruciatingly long time to say anything.
That day, I quickly gave up trying to converse with him. But Gabby was just incredible. She intuitively knew what to do. She kneeled down in front of his wheelchair and said, “Dr. Hawking, how are you today?” Then she stared into his eyes and waited patiently and silently. He took ten minutes to reply, “I’m fine. How are you?”
She could have kneeled there for an hour, waiting for him to answer.
My memory of that encounter helped me understand how I’d need to interact with Gabby during her recovery. It’s almost like something out of The Twilight Zone. It was as if Gabby was giving me a message back in 2006: “Watch me. I will be your teacher. Someday you’ll have to be patient with me and this is how you’ll need to do it.”
At the time Gabby was shot, I was preparing to serve as commander of the next shuttle mission. Gabby was starting her third term in Congress. Had she not been shot on January 8, 2011, she was scheduled to undergo fertility treatment on January 10. We hoped she’d be pregnant soon.
Gabby had such a rich life before she was injured that one of her speech therapists, an aphasia expert, recently asked her: “Given all the pain and sadness, are you glad you survived?”
“Yes, yes, yes,” Gabby said.
The therapist, Nancy Estabrooks, was struck by her lack of hesitation. “If you consider how much she had going for her, and how it all stopped abruptly,” Dr. Estabrooks said, “it’s not hard to imagine someone in that situation feeling suicidal, or losing the will to live.”
But again, Gabby was my teacher. I saw that her commitment to recover was clearly rooted in her innate optimism, her relentless drive, and in her relationship with those she loved. She’s doing so much better now. Her comprehension is 100%, she’s speaking in sentences, and she’s worked incredibly hard to keep improving. She spends forty hours a week in four kinds of therapy: physical, speech, occupational and music.
She’d like to return to Congress, and she knows that therapy is her only way to make that happen.
Meanwhile, just as Gabby has taught me so much, I’ve tried to find ways to help her see a path back to herself.
November 10th was our fourth wedding anniversary, and I surprised Gabby by inviting a cellist from the Houston Symphony to serenade us during dinner at our home. I put a white tablecloth on the kitchen table, lit candles and served a steak dinner. As the cellist played Bach, I explained to Gabby that the musician had suffered a traumatic brain injury after a 2009 motorcycle accident, and has since returned to work. “Look how beautifully he plays,” I said, hoping to help Gabby imagine her own continued recovery.
Like so many couples, Gabby and I have embraced the idea that we are each other’s teachers — and that the lessons continue every day.
We’re excited by all the possibilities that await us in 2012, and by the things we’ll learn together along the way.

********
Mark Kelly was a captain in the United States Navy when he commanded the final mission of space shuttle Endeavour in May 2011. His wife, Gabrielle Giffords has represented Arizona’s 8th Congressional District in the U.S. House of Representatives since 2007. Their new joint memoir is titled Gabby: A Story of Courage and Hope.
You can purchase Gabby: A Story of Courage and Hope at Amazon, Barnes & Noble or wherever books are sold.

One Response to “Gabby Giffords”