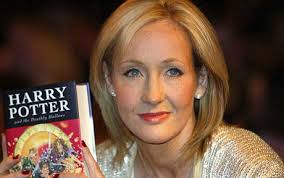 When life is zipping along and everything seems to be working as if it were a lean mean beautiful machine of happy events, it’s difficult to imagine that it won’t always continue that way.

And for you it is my fondest wish that happy events constantly fill your life.

And I do mean constantly!

But sometimes the plan of life changes and tragically, marriages fail, jobs are lost and loved ones lose their battles with illness.  It feels as though everything is in a painful disarray and everything seems complicated; making no sense at all.

That is when words of encouragement from someone who has been in a troubling place means the most.

Enter J.K. Rowling. As the uber successful author of the seven-volume Harry Potter series and other popular works of literature, you might think Rowling’s life was always one continuous path of positive events. But that is not the case at all.

I recently read an excerpt from Rowling’s book, Very Good Lives, and found her words about rebuilding your life to be uplifting.  For all of you out there who are trying to get to a more positive place in your lives, I thought it helpful to sharing Rowling’s words and her wise perspective on how to deal with failures that visit your life:

“It is fair to say that by any conventional measure, a mere seven years after my graduation day, I had failed on an epic scale. An exceptionally short-lived marriage had imploded, and I was jobless, a lone parent, and as poor as it is possible to be in modern Britain, without being homeless. By every usual standard, I was the biggest failure I knew,” Rowling writes.

“Now, I am not going to stand here and tell you that failure is fun. That period of my life was a dark one, and I had no idea that there was going to be what the press has since represented as a kind of fairy-tale resolution. I had no idea then how far the tunnel extended, and for a long time, any light at the end of it was a hope rather than a reality.

So why do I talk about the benefits of failure? Simply because failure meant a stripping away of the inessential. I stopped pretending to myself that I was anything other than what I was and began to direct all my energy into finishing the only work that mattered to me. Had I really succeeded at anything else, I might never have found the determination to succeed in the one arena I believed I truly belonged. I was set free because my greatest fear had been realized, and I was still alive, and I still had a daughter whom I adored, and I had an old typewriter and a big idea.

Failure taught me things about myself that I could have learned no other way. I discovered that I had a strong will — and more discipline than I suspected. The knowledge that you have emerged wiser and stronger from setbacks means that you are, ever after, secure in your ability to survive.”

In other words, you are stronger than you may realize.  Please take care of yourself as you process your trauma and know that you can move forward.

From A Child’s Heart