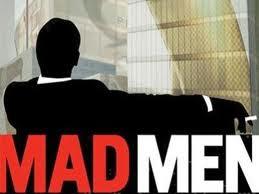 The season premiere of “Mad Men” airs tonight and I can hardly wait.  It is my favorite television show and I am very curious to see where creator Matthew Weiner takes the fabulous characters who work at the New York City ad agency of Sterling Cooper Draper Pryce.

Watching “Mad Men” is like opening up a time capsule and immersing yourself in all of the sophistication, controversy and change of the 1960’s.

The writing is suberb and from the moment you step in to the offices of Sterling Cooper you know you are in for a great time of it.  People drink constantly during the day, smoke all the time, yet there is hardly any cursing.  There are no computers or cellphones but there are lots of face-to-face meetings (romantic and business) in hotel rooms.  No one has any tatoos or piercings but there are lots of sexy crisp white shirts on the men and beautiful form fitting dresses and suits on the women.  Everyone looks like they are pulled together even though they aren’t.  And underneath all of this is the backstory of the 1960’s — civil rights, women’s changing roles at home and in the workplace, the Vietnam War, drugs and the Space race with Russia.

I also like to watch “Mad Men” because my husband worked in various news rooms in New York City during the 1960’s and I like to imagine what the city was like during that time.  I think it would be fair to say that it was a time of working hard and playing hard.  Watching Don Draper (played by the handsome Jon Hamm) and Roger Sterling (played by the witty John Slattery) is very similiar to watching two people play a game of chicken in terms of taking work and play to the limit.

So I’m going to start making the popcorn.  Check it out if you get a chance.  You won’t regret it!