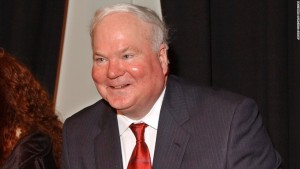 The most powerful words in English are ‘Tell me a story’

In the midst of all the hurly burly reporting of election politics that’s boldly been crowding our daily headlines,  there was a sad piece of human news last weekend that I felt got lost in the shuffle: Pat Conroy, a courageous man and super talented writer, lost his battle to cancer and died at the age of 70.

I say courageous because that’s the first word that comes to my mind when I think of him and his unusual ability to intimately write about his troubled and dysfunctional childhood and then go on to use it as the foundation for two of his best known works: “The Great Santini” and “The Prince of Tides.”  These two powerful stories were later made into Oscar-nominated movies further revealing Conroy’s difficult and problematic family life. Conroy went on to write a total of 11 books.

According to Conroy’s obituary in the New York Times, “Mr. Conroy had a brutal childhood.  He was dominated by his sadistic father, Donald, a Marine Corps fighter pilot who beat his wife, drilled his seven children military-style to instill discipline and mercilessly abused his sons, first and foremost, Pat, his eldest.  His mother, the former Frances Dolores Peek, known as Peg, was a gauzy romantic who denied her impoverished background and read ‘Gone With The Wind’ to Pat at bedtime, casting family members in starring roles.  She taught her children to lie about the physical punishment meted out by their father.”

I think you would agree that growing up and trying to handle such an unstable home situation would be quite a lot of emotional baggage for anyone to work through.  Most of the time people choose not to work through it and I can see why.

Your first instinct is to deny to yourself that you were subjected to such unrelenting abuse.  You just want to forget about it.  You want to put it behind you and create a new life for yourself.  It’s just too hard.  But Conroy was a fighter in the best sense of the word.  Besides cancer, Conroy also battled alcoholism, Type 2 diabetes and high blood pressure.  More than three years ago, Conroy was hospitalized for his failing health.  After being released, he worked hard to regain his health, losing weight, giving up alcohol and exercising on a regular basis.  He had a strong will to enjoy life, even though he was reminded of its dark side, and he also liked to constantly push and challenge himself.  That is why I think of Conroy as a truly courageous man besides being a beautiful writer.

He faced his fears and sometimes his fears took him to an anxious place but never gave up.

To sit down, emotionally open himself up to raw feelings and explicitly tell what happened to him and his family is beyond amazing.  It’s enough to just survive, grow up and eventually break free from the abuse but then to choose to write about it is entirely another matter.  I guess the writing could have been cathartic for him because in the writing he was processing and working it out as he was writing, perhaps healing himself bit by bit as he wrote about it.  There is also the idea that through his lyrical story telling Conroy was sending the message to others who were growing up or dealing with similar family situations that they need not feel alone or isolated in their shame.

I think Conroy’s courageous message was definitely received and warmly embraced by readers worldwide and the proof is in the millions of books that he sold.

Rest in peace Pat Conroy.  You forged a unique and memorable path and you will be missed.