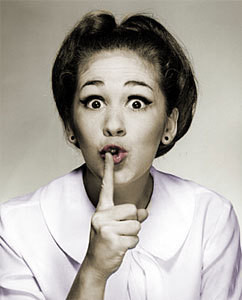 Life sometimes reminds me of a science experiment.

The science I am reminded of today has to do with the classic law of physics that we all learned in school and that is: For every action, there is an equal and opposite reaction.

Conversations can sometimes fall into this law of physics, many of them revolving around that push-pull, turning into equal and opposite reactions of a dynamic conversation or they can lack any kind of dynamic when the conversation is entirely one way.

But then there are those conversations when you really don’t know what to say.

At all.  As in when no words come to mind and you are speechless.

Being speechless is not something I am particularly familiar with but I want to be.  As a child and rambunctious teenager, I was never at a lack for some kind of an answer.  Let me tell you, this was not a good thing.

Maybe it has to do with being the oldest of six children and when your parents ask you something you feel compelled to give them some kind of an answer, even if it’s the wrong one.

That would definitely be me.  Much like a science experiment melting down, I have quickly offered the wrong answer, the flip answer, the unvarnished truth answer, letting it roll off my tongue without a second thought.

These days, I try to exercise A LOT more restraint and I even recognize that sometimes not saying anything is more powerful than any words I could utter.

Silence.  What a concept right?

Holding your tongue is a skill I admire.  Or if you will, a science experience gone great.  Holding my tongue is not a skill that comes naturally to me but I continually practice it hoping that I will become better at it.

You can understand then when I was intrigued recently when I ran across a short article in an old issue of Real Simple Magazine titled, “5 Times When You Should Hold Your Tongue.”

One of those five times really struck a chord with me and the one I share with you today is written by Hoda Kotb, co-host of the fourth hour of NBC’s Today Show with Kathie Lee Gifford.  Kotb is also an author.

I find Hoda’s story to be a tender and wonderful reminder of the power of being a good listener and I wanted to bring it to your attention because it illustrates how grief can seep inside you yet you can’t find a way to talk about it.

When someone you are with is sad, angry, upset or feeling any number of emotions, being quiet lets them work through all of the intense and conflicting feelings that they are trying to make sense of.

By remaining silent, you are giving the other person everything.  All the air, all the time, all the attention.

As in a science experiment bubbling along, if there is no action from you then the other person gets all the energy.

In this case, Hoda’s crisis is about her unacknowledged feelings of grief for her deceased father but it also could have easily been about feelings from any issue causing a personal crisis.

Here is Hoda’s story in her own words:

“My Dad passed away when I was in college.  I was taking an exam shortly after it happened, and I couldn’t focus.  I picked up my backpack and walked out of the class.

The teacher said, “If you leave, you’re going to fail this test.  That’s going to hurt your average.  I’m not sure you’ll pass the class.”

My dearest friend, Peggy, picked up her backpack and followed me out.  I walked to this place called the Duck Pond, where it was just very mellow.  I sat on a picnic table, and she sat next to me, without saying a word.

After about five minutes, I looked at her and I said, “Oh, my God,” and I started talking about my Dad’s death.

Now, if she had been asking me, “Are you OK?  What do you need?” I don’t know if it would have worked.

We both just sat quietly.

Sometimes you just need to stop talking, because in silence, the truth comes out.”

A Silly Video About Scotch