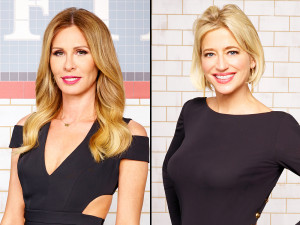 Watching The Real Housewives of New York City is one of my guilty pleasures.

And sometimes the series surprises me with it’s ability to handle sensitive subjects with unexpected compassion and depth.

Such as a recent episode which featured Carole Raziwill (journalist, author) and Dorinda Medley (entrepreneur, Manhattan socialite) deciding to travel together to London.  You might think given the usual content of RHONYC that they are traveling to London to buy a house or attend a party or visit a relative or friend.

Not at all.  London is a city of significance for both women because it holds precious memories of their deceased husbands.

Carole is called to London for the most unlikely of reasons: to claim the ashes of her late husband, Anthony, who died 15 years ago.  The church in London where she had interned her late husband’s ashes on the one year anniversary of his death, emailed her that the church holding his ashes was being deconsecrated and torn down to make way for new condos.

Dorinda lived in London for 10 years, her daughter was born there yet when her husband, Richard, died in 2011, she left London and has not visited since Richard’s death.

Lots of unfinished business there, I think.

Even though I obviously don’t know these women, I felt I understood where they were coming from having experienced the loss of my husband in 2003.  Watching the episode, I felt as though I would be feeling a lot of anxiety if I were in their places, trying to imagine what it would be like to navigate my way through a city that held constant reminders of lost loves and much happier times.

At the same time, I also thought it was very brave of Carole and Dorinda to allow cameras to follow them around and listen to their many intimate conversations reminiscing about their husbands and their past lives when they were married to these men.  Bravo showed  a lot of sensitivity in its handling of these two sad but uplifting stories.

I truly believe in the power of vulnerability and I am guessing that Carole and Dorinda do too.  While it is painful and very scary to open yourself up and share your most intimate feelings in such a public way, I think they did a wonderful and unusual thing that could influence and help others trying to make sense of their own complicated feelings of grief.

I found it compelling and personally helpful to know that some of the things that they were feeling were some of the same things I have felt.  I felt less alone in my conflicts about grief after watching the episode.  Carole’s story especially resonated with me because of the length of time since her husband’s death.

Most people probably think that 15 years is enough time to process your feelings loss and then get going with a new life.  No so.  It is not always true that the feelings of loss just end after a certain amount of time and I give lots of kudos to Carole for letting the cameras show her bring her husband’s urn back to the hotel, place it on the side table and gently touch it while crying.  As she explains during the episode she is crying for the husband that she lost and also for the possibilities that might have been had her beloved Anthony beat cancer.

Carole addressed this on her blog: “I remembered a promise I made to myself after Anthony’s death that I would listen to what the universe was putting in front of me — the good, the bad, and the weird — and I would follow it with as much courage as I could muster.  For better or worse I signed on to this show.  And here I am.  Sure, I cried a bit and that is always embarrassing to me to watch, but in the end, as I watched it, I felt proud.  Proud that I had the courage to talk about my husband.  Proud, again, of the life we built together and of the life I have built since.”

For Dorinda, she freely admitted she was petrified of returning to London and dealing with all of the emotions that the visit would bring back to her.  Dorinda said she developed some of her most treasured friendships while living in London and it was particularly bittersweet to watch her catch-up with many of those friends at a cocktail party that she and Carole hosted.  One friend spoke of recently looking at an old picture of Dorinda and Richard together and noticing how much vitality they had as a couple when they were together.  Dorinda joked that Richard had once told her that he didn’t want her to meet anyone else.  “This (their marriage) should be enough for you,” Dorinda said recounting Richard’s remarks.

Going back to London helped Dorinda face her fears and “have a gander at all those old ghosts of Londontown,” she said.  In a healing way, Dorinda added, the trip helped her realize that before Richard she had a wonderful life, that life with Richard was also a wonderful time and that she looks forward to a new life after Richard’s death.

It was a tender episode that beautifully explored the dimensions of grief, friendship and starting over again.