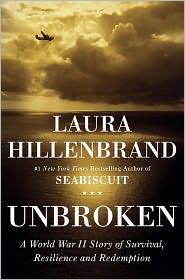 Resilience is having the capacity to bounce back from change, failure or trauma.  Some people are lucky enough to be born with tons of relience and others of us constantly work on it.

If you are looking for insight into the boundaries of resilience, then please read, “Unbroken,” by Laura Hillenbrand.  You may remember Laura Hillenbrand for the exceptional research and writing she gave us in her first book, “Seabiscuit.”  Hillenbrand’s new book, “Unbroken,” is the compelling story of Louis Zamperini, a talented and ferociously competitive runner who participated in the Berlin Olympics and is a World War II hero.  He is still alive and kickin’ at 94 years young.

I have always been fascinated by the way people handle traumatic or stressful situations because their reaction to it can be revealing.  You may see a side of that person that you haven’t seen before and might not want to see again.  But then again you might see a side of someone that helped you through a bad time and you always want to be around that again.  Why is it then, or maybe what is it, in a person’s DNA that sends them a signal telling them to maintain their cool while others loose it?  What is it in another person’s DNA that jumpstarts a meltdown when they are asked to take on the smallest responsibility?  How does a person keep it together when their circumstances are totally against them?

In “Unbroken,” you’ll discover that Louis Zamperini is the essence of resilience.

“Few societies treasured dignity, and feared humiliation, as did the Japanese, for whom a loss of honor could merit suicide.  This is likely one of the reasons why Japanese soldiers in World War II debased their prisoners with such zeal, seeking to take from them that which was most painful and destructive to lose.  On Kwajalein, Louie and Phil learned a dark truth known to the doomed in Hitler’s death camps, the slaves of the American South, and a hundred other generations of betrayed people.  Dignity is essential to human life as water, food and oxygen.  The stubborn retention of it, even in the face of extreme physical hardship, can hold a man’s soul in his body long past the point at which the body should have surrenered to it.  The loss of it can carry a man off as surely as thirst, hunger, exposure, and asphyxiation, and with greater cruelty.  In places like Kwajalein, degradation could be as lethal as a bullet.”

Rather than seeing himself as a victim of his circumstances, Louie dug way down deep into himself and found reserves of emotional and mental resilience that he must have never known that he had to survive the absolutely brutal and inhuman conditions he was forced to live in.  His journey is truly inspirational.

I salute you, Louie.  You taught me that you have to stay in the game and you can’t give up.

Take Good Care Of My Heart