I see my husband in my son in small ways:  the way he rolls up his long sleeved shirts, the set of his jaw when he is annoyed or determined to do something he really wants to accomplish and the way he plays chicken with his car’s gas tank and won’t fill it up until it is almost empty.
When I see those traits it is bittersweet: they make me laugh and but they also make me feel a little sad and wistful.    “He is still with us,” I think to myself.  My husband had a very strong personality so I am not surprised that I see some of him in our son.  It’s just when those quirky things appear, they always have a way of taking me by surprise. 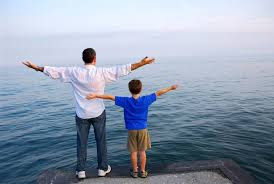 My thoughts today are with fathers and the important role they play in their children’s lives.  While my son’s father died nine years ago, I appreciate the important role he played in our young son’s life and how his influence can still be felt today.
Please read the timely story below which I found on the insightful website, Hello Grief (www.hellogrief.org).  The author, Abigail Carter, sweetly reminds us of the importance of Dads everywhere; the ones who are with us today and the ones that we forever hold in our hearts.
Happy Father’s Day! 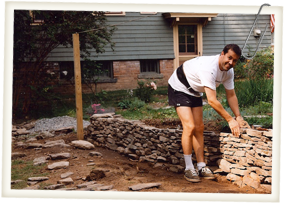 Every Day is Father’s Day

By Abigail Carter
June 8, 2010
Father’s Day never held much importance for our family until the death of my husband, Arron, father of our two young children.
The day usually began with a childish command for him to stay in bed so he could be the lucky recipient of a sticky tray of burnt pancakes and watery coffee, and be handed a construction paper card with “I lov you dady,” in bright red crayon, or a popsicle stick picture frame with a blurry Polaroid of a proud pre-schooler.
Later in the day, as he jiggled the kids around on the heavy metal lumber cart at Home Depot, I refrained from my usual “step away from the power tools,” and allowed him to run amuck, our list of supplies forgotten in his pocket. For dinner I would make one of his favorites – chicken stew, or if the weather was nice, a steak grilled on the BBQ and a glass of wine after the kids were in bed.
Our first Father’s Day after his death was spent in the company of several other widows on a deserted New Jersey Shore beach watching our children romp around in the waves or play in the sand, wishing we had the ability to play so freely, wishing we could have our old lives back. The male volunteers who grilled hot dogs for lunch just seemed to add salt to our wounds.
The days and weeks afterward were spent in a heightened state of agitation to which we were oblivious – fighting, frustrated, exhausted – until someone pointed out how difficult Father’s Day must have been. Finally able to connect the dots between the day and the aggression that had settled upon my family, the black moods eventually dissipated, at least until the next event that needed to braced for, like one of the kid’s birthdays, or another wedding anniversary. Year two was a repeat of year one, the bracing, the beach, the fatherless kids, the male volunteers, the loneliness, the anger, the exhaustion.
Friends and family, while well-meaning often added to the stress, building the potential heart-break of the day by calling to offer sad Happy Father’s Day wishes, or to offer to take the kids away, thinking that what they needed was to spend time with a man, one that was usually someone else’s father.
There was another year, the year I picked my son up from Pre-K after his class had been busy making presents for their fathers, and when we got into the car, he threw the present at me, something square wrapped in emerald green tissue paper. “Who am I going to give this to?” He yelled. “All the other kids have dads and I don’t!” In one day, with the realization that he was not like all the other kids, he had gone from a sad child to an angry one – anger that eight years later is only beginning to dissipate.
For many widows with children, Father’s Day creeps up and pounces on us. Sometimes we just anticipate it with dread – more glaring evidence of what we have lost. Everyone (not just widows) tries to celebrate the day in some meaningful way, trying to honor that special Dad. Newspapers and television ads are filled with things we are meant to buy, sentiments we are meant to feel. There is so much pressure to ‘honor” our loved one properly, even when they are alive, but no one seems quite sure how to go about doing so.
We have tried a variety of different activities on Father’s Day. Things my husband would have enjoyed: bike rides in the park, planting a shrub in the garden, an IMAX movie downtown, a steak on the BBQ. The day has become less sad, held less meaning as the kids grow and have adapted to their life with only one parent. But with each passing year, Father’s Day becomes less and less volatile.
The kids have almost passed the period in elementary school where presents are being made in class. And if they are, the kids have adapted. Presents have been awarded to grandfathers or other men of importance in their lives at the time. I considered last year a kind of breakthrough when my son, still in elementary school decided to participate in his class’s annual Father’s Day craft project. When the day arrived, he presented his gift to me saying, “since you are pretty much like our dad as well as our mom, this is for you.” It was the compliment of a lifetime, and reminded me how far we had all come.
This year will be our eighth Father’s Day without a father to honor, and again, it will likely be passed with very little fanfare. In other years I have felt guilt for wanting to ignore these events, making up for it by forcing a celebration with trips to the beach, riding bikes, making Mickey Mouse pancakes – pretending that our family was still whole, pretending that my husband could still appreciate these efforts. It was my son who finally reminded me of the pressures I was putting on all of us when he asked, “Why do we always do all this stuff on Father’s Day when we don’t even have a dad?” I thought we had been doing it to remember him, but I realized that really I was doing it because I felt like I had to. My efforts were stressing me out and doing nothing to help us remember Arron, let alone honor him.
Instead of pancakes and bike rides and beach trips one day every June, I realized that all it takes to celebrate Father’s Day is for me to recognize one of my husband’s goofy expressions in our daughter, or his familiar glint of mischief in the eye of our son and laugh saying, “you look just like your father when you do that!”
That way every day is Father’s Day.

* * * *
By guest writer, Abigail Carter. View more of her essays at www.alchemyofloss.com [2] and learn more about her at www.abigailcarter.com [3].