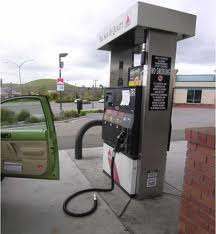 On Saturday, I went to visit my parents who are in their eighties and my brother who has Down’s Syndrome.
It was a beautiful day, full of sunshine and hints of the coming of Spring.  We had a delicious lunch at a local Irish pub and some good solid conversation and then it was time for me to “toddle on home,” as my great friend Ellen would say.
I stopped at the gas station near my parent’s house because I like to take advantage of the cheaper gas prices in Rockville, Maryland.  There were no other cars in the gas station so I had the pick of any pump.  After I stopped and got out of the car, I walked up to the concrete island where the gas pumps are located, thinking I would cut through to the cashier.
As I stepped up to the concrete island, I looked down to check my coat pocket where I had earlier put a twenty dollar bill.  One foot was on the island and I guess I thought my other foot had cleared the island but it hadn’t.  I know you know what happened next.
In an instant — it’s so cliche, but so true — I lost control and went flying across the concrete.  The next thing I knew I could feel my face scraping the rough surface of the pavement. BAM!  I laid there for a few minutes and hoped I hadn’t broken anything.  At the same time, I had this vision of what I looked like from another person’s perspective as in “What in the hell is that woman doing laying on the concrete by the gas pump?”
For all of you adults out there — men and women — I hope you remain upright every day of your life.  Falling is humiliating and scary.  When it is happening you really don’t know how or where you are going to land.  At first, I was afraid to move, but then I slowly got up.  As I did I felt my face was bleeding but I couldn’t tell where and I also realized I had ripped a hole in the right knee of my pants and my knee was scraped too.
As I slowly walked into the gas station, I felt the full impact of what had happened and started to cry.  You should have seen the look on the two guys inside the gas station store.  One was sitting down on a chair and immediately jumped up and came to help me and the other one went to get a first aid kit.  There was no mirror so I had to look into the stainless steel that surrounds the edge of the refrigerator doors where drinks are sold.  It was then that I realized I had cut my nose and my chin and also scraped my glasses on the lense and on the bridge.
The younger guy kept asking me if I was okay because I couldn’t stop crying.  I think I was crying more out of frustration than actual pain although my face was throbbing.  I couldn’t believe I had done this to myself.  What a klutz!  You would think that at this point in my life that I would be able to put one foot in front of the other.
Eventually I got cleaned up and the younger guy offered to pump my gas.  One of my sisters said he should have offered to give me free gas but I don’t think that ever happens.
As I drove home, I went over the events again in my mind and realized what a wake-up call it was.  At least my fall had happened in a public place.  Even though no one had been with me, strangers had reached out to help me.  But suppose others hadn’t been around.
I felt that fear that comes when there is the possibility that you might not be able to take care of yourself.  I do need to be more aware of myself and my surroundings and concentrate on whatever the moment at hand is.When you are in a hurry and you are thinking about too many things at the same time, this is when life reminds you that you need to stop and be more careful about what you are doing.
I was lucky!!! I didn’t break anything and I was able to get up on my own and go about my business.
And I learned the hard way that when I am by myself, I can’t be so casual about moving around.
Okay, universe I heard your message and I have taken it to heart: Be careful out there!
Share this post: