Angry grief is not pretty; especially the white hot, messy anger that Richard Martinez is feeling.

Uncomfortable as it is to watch, everything Martinez is feeling is normal and human.  He is expressing the rage and the sorrow he feels right now at the tragic loss 0f his son.  We aren’t used to watching someone freely express their unfiltered, raw anger about the loss of a loved one.  Our culture sends us the message that it’s better to keep a lid on it.  Don’t emote all over the place.

Yet Martinez has experienced a shock, a deep loss that is blowing his world apart and he wants others to know what it feels like.  His 20-year-old son and only child, Christopher, was gunned down last Friday during the senseless knifing and shooting attacks by Elliot Rodgers in Santa Barbara, California.  Rodgers killed six people and then took his own life by shooting himself.

“I don’t care about your sympathy.  I don’t give a s— that you feel sorry for me,” Richard Martinez said yesterday during an interview he gave to reporters.  Tearful and clearly in deep pain, Martinez called for immediate action by Congress and President Obama to pass stricter gun-control laws.  “Get to work and do something.  I’ll tell the president if he calls me.  Getting a call from a politician doesn’t impress me.” 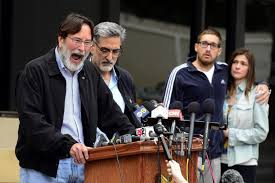 This is what active grieving looks like when it goes public.  Crying out. Shouting. Weeping.

This is also what it looks like when you feel you have nothing to lose because someone you hold dear, someone who is so precious to you, has been violently taken away from you.

I’m not saying that it’s okay to go around yelling at people if you have experienced the loss of a loved one but  I am saying that anger and grief can be felt at the same time and each person needs to find a place or a trusted person to help them deal with and work through that anger.

Sometimes we are angry at the person just because they died and are no longer with us.  It feels selfish but that is just the way it feels.

Sometimes we are angry that the person who died didn’t make better health decisions.  I am familiar with this feeling and felt it for awhile after my husband’s death.  It took me a long time to work through the idea that my husband did the best he could and so did I.

Sometimes we are angry at the medical system and we feel that the doctors, nurses and health care insurers could have done more to support the person in their illness.

And sometimes we are angry because death brings change and we just don’t want things to change.

2 Responses to “Angry Grief Is Not Pretty”

Walkin’ Off Those Cupcakes