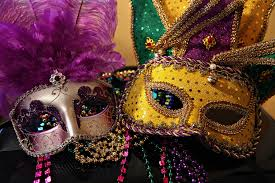 I hope everyone had a blast yesterday at whatever Mardi Gras event you might have attended for today is Ash Wednesday which marks the beginning of Lent.  You might have let the good times roll too much and are feeling  some pain and discomfort today from too much alcohol, food or lack of sleep but the good news is that you can offer it up as your lenten penance.  OMG, doesn’t that sound like something a Catholic school nun would have told you?

For those of you who are not Catholic, today is Ash Wednesday, the first day of Lent, a season of fasting and self-denial.  You’ll be able to tell who the Catholics are today because we are the ones walking around looking like we might have been playing around in an ashtray and mistakenly put the ashes on our foreheads.  We have ashes pressed on our foreheads in the sign of the cross by a priest at the beginning of Lent to remind us that eventually we will all die and turn into ashes — ashes to ashes, dust to dust — and Jesus is our salvation.

Lent is a time of reflection and penance in preparation for Christ’s Resurrection on Easter Sunday.  Usually people give up something they really like a lot for Lent but you can also choose to work on something about yourself that needs improvement.  In my case, the list of things that could be improved is endless!

Over this past weekend, I was visiting my son in New York and he was talking about either giving up chocolate for Lent or doing something that would require personal improvement.  I, of course, hadn’t thought about Lent at all and I was surprised he was even thinking of Lent.  Or maybe he brought it up to let me think he was doing something for Lent.  Anyway, he said wasn’t sure what he was going to do and asked me what I had planned.  I told him that when I was in school I always gave up candy.  The idea of going 40 days without anything sweet always seemed impossible.  But then some relative told me that there was some new Catholic rule and on the Sundays in Lent we were now allowed to do or eat the thing that we had committed to as a Lenten goal and that kindof blew the lid off Lent for me.  Lent didn’t seem so dark and punishing when I knew I only had to go from Sunday to Sunday.

Lent also brings back lots of childhood memories.  If you went to Catholic school then you will probably also remember how you thought that the weekly Stations of the Cross would go on forever in a hot church filled with children and teachers, the smell of tuna and egg salad sandwiches in your classroom told you it was Friday since meat was not allowed to be eaten on that day, fasting and saying the rosary for hours on numb knees and “might” boxes to save money for the poor.

I have no idea what my son decided to do for Lent but I know for me it’s harder to work on a personal flaw than give something up.  During this year’s Lent I will be working on patience.  This year’s flaws were a toss up between not cursing and patience and patience won.  If you think that sounds easy then you should try driving in the Washington, DC metropolitan area during morning or evening rush hour.

Patience is totally a virtue that is not found in any driver.  But I’m hoping for the best and wishing everyone good luck in whatever they decide to do for Lent!

Happiness Is A Choice