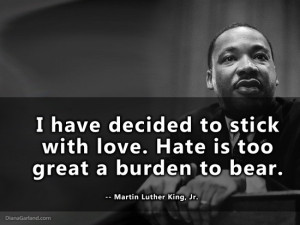 King understood that in the face of racism and discrimination that the first response among most people is to want to protest and fight back in a destructive way.   It’s pretty much human nature for someone who is being abused to want to push back and it would have been easy for King to talk of using angry, armed … Read More

Ugh.  I feel as though I have been stuck in a lot of life’s drama lately and it is distracting me. Big drama has been happening to me on all fronts of my life and I just thought I would let you wonderful readers know the reason why I haven’t been able to post on my blog as much as I would like.  Not that you are hanging on to every word I ever post but I thought it would be nice of me to give an explanation for cutting back lately. I can’t and don’t think it would be… Read More
It is Friday and I am one big burnt piece of toast! It has been a week of going to the hospital (hopefully my Dad will be discharged today), car maintenance (way too expensive) and early starts at work (hate the alarm).  But I am truly looking forward to the end of today because that is when my well-deserved vacation begins!!!!!! As hard as I try to maneuver around the built-in stress of the above situations, I am just a human being like anyone else and I do get sucked into worrying about all of these things instead of having… Read More
Miranda Lambert We like to think that the people we love will remain with us forever. No one wants to think of a time or be faced with a time when a loved one gets sick, is in an accident or worse and will no longer be here. But unfortunately, sadly and even tragically, life does not work the way we want, as hard as we always try to will it to work our way. The reason why I am drawn to the haunting song, “Over You,” sung here by award-winning country music singer Miranda Lambert, who also co-wrote this… Read More
I have previously written about people I know who are fighting the good fight against cancer.  Three of them at this point are in good health while one is gearing up for the fight of his life. He is getting ready for surgery next week and after that he enters an intense, aggressive program aimed at totally killing this sucker in its tracks.  He has an amazing attitude towards this scary situation and I admire his calm and even demeanor.   Put in the same situation, I know I would not be faring so well and I don’t think I… Read More
Work, children, friends, lovers, spouses. . . So much is happening in all of our lives and it all seems to zip along a lot faster than we want. At 90 years young, Regina Brett has a unique perspective on the rhythms of life and how to get back up and dust yourself off after life has kicked you in the teeth.  I have no idea whether I will live as long as Regina, but if I do, I hope to be the wise woman she has turned out to be!! Brett is a columnist for the Cleveland Plain Dealer… Read More
This is a beautiful and moving story about a husband and wife and their love and respect for one another. Sadly, the time recently arrived for one of them to say good-bye to the other. In the following column by The Washington Post’s Courtland Milloy, he writes of the spirit of the union between Washington Post reporter Lynne Duke and Washington Post editor Phillip Dixon in the essential phrase “sometimes yin and yang, sometimes nitro and glycerin.” Milloy is an awesome friend, doing what friends do best, offering emotional support and condolences to Phillip Dixon, and at the same time… Read More
One of my brothers has a wacky way of making a joke exactly when it’s needed. His timing and dry delivery are impeccable!  Just when the situation is starting to get either too serious or is totally out of hand, I can always depend on my brother to throw an exclamation point into the conversation.   It’s not an easy thing to do.  There’s a fine line between funny and unfunny and once you cross over into unfunny, it’s hard to undo and recover your mojo. I’ve delivered some whoppers that have crashed on delivery but I don’t try to… Read More
Today is Earth Day and I give thanks to Mother Nature for her endless gifts. As we turn our focus on cleaning up and protecting the environment, events in Washington, DC (cleaning up the Anacostia River) and communities around the globe are being held today to remind us that our natural resources are precious and finite and shouldn’t be taken for granted.  When we take better care of Mother Earth, she takes better care of us, giving us tranquil beauty and continual inspiration. Nature also has the incredible capability to heal us: the fragrance of a flower, the cleansing sound… Read More