Yesterday’s news that Time magazine selected Pope Francis as their Person Of The Year surprised me just as much as when the College of Cardinals elected him to become Pope.
I didn’t think it would really happen but I am ecstatic that it did!
I knew Pope Francis was a finalist for the annual honor but I really thought that Time magazine was going to go with former National Security Agency contractor Edward Snowden, who this year released hundreds of thousands of classified government documents revealing the depth of the U.S. government’s surveillance on phone and internet communications.
But spiritual won out.  Congratulations Pope Francis! 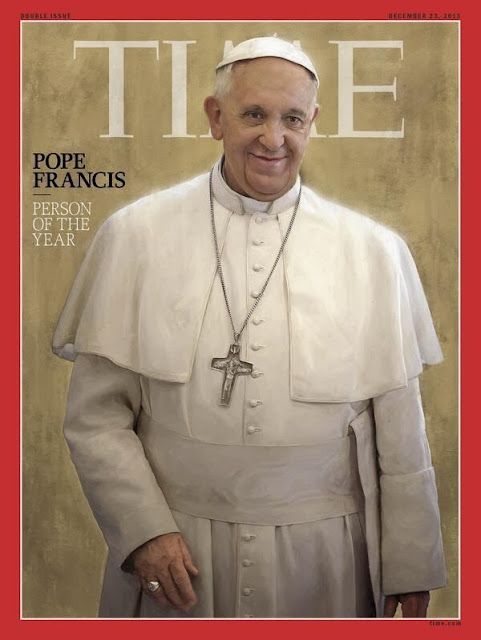 You are the real deal!!  You not only talk about the need to help the poor but you roll up your sleeves and get your own papal hands dirty trying to make the lives of the poor better yourself.
People love you and are excited about your humble leadership because you are inclusive.  You are a healer.  You have come along at a time when the world at large and the Catholic community desperately needs you and your gentle guidance.
Recently you invited nearly 200 homeless people to join you for dinner at the Vatican and there also were news stories about you sneaking out at night dressed as a regular priest to meet with homeless men and women to give comfort and listen to their concerns.
You are quickly shifting the priorities of the hierarchy of the Catholic Church from abortion, contraception, gay marriage and the nuns to more Christian issues such as poverty, materialism and the inequity of the world’s economy.
Equally as important, you are opening the doors on the Vatican bank and calling for transparency.  I say it’s about time someone threw some light on the decades of secretive Vatican Bank transactions and I must add there are times when I pray for you because I worry about you.
But then I remember that you are a Jesuit and Jesuits are always in a class by themselves!
Share this post:

A Cup Of Healing