After (hopefully) fours years of hard, hard work and spending thousands and thousands of dollars on college tuitions, remarks by a notable person — whether an author, celebrity, scientist, politician or even the First Lady or the President of the United States — definitely seems in order this time of year before degrees are handed out at universities across the nation.
For the parents, relatives and friends of the graduate, and even those of us who have already graduated, whether from a university, a community college or the School of Street Smarts, the commencement speech is also a time to pause and listen; to see whether the speaker can offer us new insights about life.
We can gain new perspectives or get our engines reignited by remarks made in the annual rite of commencement speeches.The reason I find commencement speeches so capitvating is that they usually reveal something about the speaker that we might not have known before.  Many times, the commencement speaker talks about what they were like as a young person, what they wanted to achieve, what life instead handed them and then what they did with life’s surprises.

Commencement speeches show us the resilience of the human spirit, for everyone needs resilience in order to move forward.  Some people do graduate from college and go forth into the world and do exactly what they planned to do and that’s wonderful!  But I think I not only speak for myself, but also for many, many others, who start out thinking they are going to do one thing when they leave college and then end up doing something very different.

As the Class of 2013 leaves their respective campuses, poised for change, they may find a world very different from what they expected — or maybe not.Here are a few of this year’s commencement speeches that stood out for me:

Former U.S. Representative Gabrielle Giffords (who is still recovering from being shot in the head in 2011), Bard College:

“The nation’s counting on you to create, to lead, to innovate.  Be bold, be courageous, do your best.”

“We’ve got no time for excuses.  In today’s hyper-connected, hyper competitive world, with millions of young people from China and India and Brazil, many of whom started with a whole lot less than all of you did, all of them entering the global workforce alongside you, nobody is going to give you anything you haven’t earned.  Nobody cares how tough your upbringing was.  Nobody cares if you suffered some discrimination.
“Moreover, you have to remember that whatever you’ve gone through, it pales in comparison to the hardships previous generations endured — and if they overcame them, you can overcome them, too.”

“I’m not going to tell you that money doesn’t matter, because you wouldn’t believe me anyway. In fact, for too many people around the world, money is literally a life-or-death proposition. But if you are part of the lucky minority with the ability to choose, remember that money is a means, not an end. A career decision based only on money and not on love of the work or a desire to make a difference is a recipe for unhappiness.”

“There is no secret society out there that will tap you on the shoulder and show you the way.  The true secret is, your life will not be defined by the society we have left you. . . Every generation must define itself.  If you must find your own path, and we have left you no easy path, then decide now to choose the hard path that leads to the life and the world that you want.”
TV host & Multimedia Entrepreneur Oprah Winfrey, Harvard University:“It doesn’t matter how far you might rise, at some point you are bound to stumble.  Because if you’re constantly doing what we do, raising the bar. If you’re constantly pushing yourself higher, higher, the law of averages, not to mention The Myth of Icarus, predicts that you will at some point fall. And when you do, I want you to know this, remember this: There is no such thing as failure. Failure is just life trying to move us into another direction.”

“It’s okay to feel bad for a little while.  Give yourself time to mourn what you think you may have lost. But then, here’s the key: Learn from every mistake because every experience, encounter, and particularly your mistakes, are there to teach you and force you into being more of who you are.”

Here’s to the Class of 2013!  Congratulations and Good Luck!! 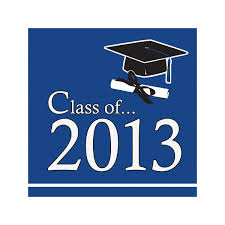 Prescription: Go To The Beach!