If you ever doubted that one person can make a difference, then please meet Danielle Cook Navidi.
Navidi is a loving mother totally committed to the idea that she could cook healthy food for her then 11-year-old son, Fabien Navidi-Kasmai, diagnosed and receiving treatment for Stage III Hodgkin’s lymphoma.  His taste buds were shot, he couldn’t digest his favorite foods and sadly, he would go for days without eating.
Navidi reminds me of many mothers I know who are steadfast in their beliefs about what can help their children even when others, such as doctors, tell them that their ideas won’t work.  Their motherly instincts tell them that they are right and they are determined to find a way to make it work for their children.
Nutrition was not a priority for the doctors.  They told her it was fine if he ate fast food but Navidi knew he needed fresh nutrients in his system if he was going to remain strong enough to fight the cancer.  She couldn’t accept the idea of feeding McDonald’s to her son and instead went back to her own kitchen and started cooking what most mothers give their children when they are ill: chicken soup.
There’s something primal about wanting to cook for family, especially when someone is ill.  The prepared food is a reflection of your love and concern and also a way to nurture your loved one back to good health.  Cooking can be an incredibly healing experience, taking you out of yourself as you taste and experiment, hoping for maximum deliciousness!!
Navidi made the soup herself and expanded the recipes to accomodate her son’s cancer treatments.  He was able to digest her homecooked meals and gained weight.  Today, Navidi’s son, Fabien, is 19-years old and, thankfully, in remission.
And her story gets better.  Navidi started volunteering at Georgetown University Hospital in 2008 making smoothies for other children at the hospital being treated for cancer.  She now offers free cooking class at Georgetown to the families of children with cancer and turned her recipes into a book titled “Happily Hungry: Smart Recipes for Kids with Cancer.”
What a Mom!!!!  Here’s her full story which was recently written about in The Washington Post:

Cooking for kids with cancer 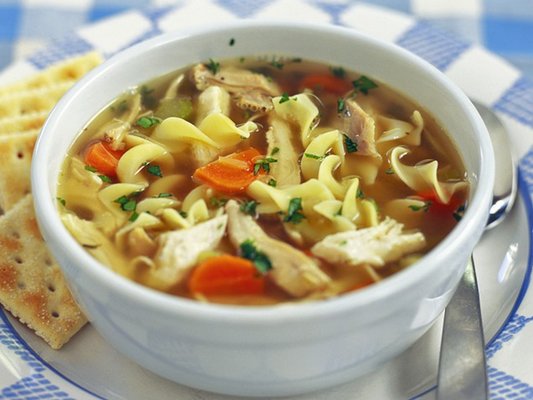 Life Can Be A Beach

Life Is Not a Cereal