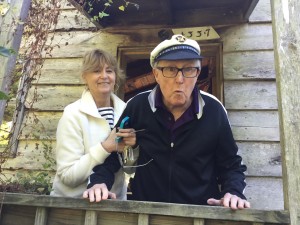 My Dad and I Goofing Around

I miss hearing his voice, talking to him and hanging out with him.

I miss helping him with his eye drops, reading the newspaper to him and bringing him his favorite chicken salad sandwiches from Panera.

I miss the way he talked like Donald Duck and his funny way of telling a story.

His funeral was on March 2 and I am trying hard to figure out how to deal with his absence, the actual physical loss of him.

I went to my parents house yesterday and it felt so empty, so weird that he wasn’t there.  I went into his office and all of his pictures and memorabilia were there, pretty much the way he left them.  I sat in his chair in the family room for awhile and imagined that any minute now he might walk in or call for someone.  But of course, it didn’t happen.

I have not been sleeping well since his death.  I’m tired but can’t seem to rest.  I guess I have too many thoughts swirling around in my head.  Life seems to be off kilter and things seem to be happening in slow motion.

I go to work and have been trying to resume my life, trying to keep going forward but mentally I sometimes picture him as he was when he was in hospice.  I will never forget the last week of his life.

My siblings and I, our Mom, our Dad’s brother and sister and other members of our family would sit around his bed every day, holding his hands, talking to him and singing to him, which he loved.  Sometimes in the background we softly played Irish music or Frank Sinatra.  Sometimes, I sat there and silently prayed.  Time seemed suspended while we were in this phase and we hoped he could feel the strength of our love for him.

My favorite way of keeping company with him was just to sit holding his hands.  Sometimes he would nap and other times I would feed him his favorite ice cream.  Even in hospice care, he had quite a strong hand grip and for that short time that he squeezed our hands, it was good to feel him fighting to stay with us

We were so very lucky to have him with us for 89 years.  What a wonderful adventurous life he had.  My Dad was a natural people person, making friends with people from all walks of life.  He always felt that making someone laugh was a way of showing kindness and that if you could get someone to laugh with you then you had created a bond with them.

My siblings and I think he would have loved all of the loving touches that we added to his funeral; just for him.  His Cranston plaid blanket laid on his casket, the single green carnation that each of his grandchildren placed on the casket during Mass and the eulogy that my brother and I delivered which included as many stories as we could tell about his passion for life.

But I think his very favorite thing would have been the bagpipe played at the church and at the cemetery.

Even though he had been diagnosed with dementia, he still knew who his family was until the end.  He was a good man and loving father to all of his six children, twelve grandchildren and seven great grandchildren.  He was a man with a kind and generous spirit.  And that’s saying something.

I loved him so very much.