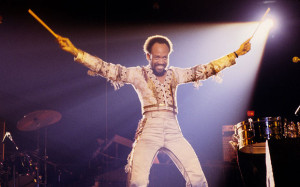 The music that some bands create can be so distinctive that you know their songs right away.  Almost instantly.  As in when you hear the first few bars of a song, you know it’s theirs and theirs alone.

Falling into this unique category would be the fabulous and funky music created by the hit making machine called Earth, Wind & Fire.

Maurice White, a major musical talent who founded Earth, Wind & Fire and co-wrote such hits as “Shining Star,” “Sing A Song,” “September,” “Reasons,” and “Fantasy,” sadly died last week in his sleep at the age of 74.  White suffered from Parkinson’s.

You know a band has to be doing something rocking and right when they sell they sell over 80 million records, win multiple Grammys, are inducted into the Rock and Roll Music Hall of Fame and on top of that, people continue to constantly play songs that Earth, Wind & Fire recorded decades ago in the 70’s and 80’s.

I have always been a big Earth, Wind and Fire fan and to me their music is infectious, always making me want to get up and dance no matter where I am when I hear it.  Truly!! There is something about their jazzy, r&b, funkorama music that got into my DNA and hearing their songs always takes me back to some magical and fun times.

As Maurice White said in an interview with the online music magazine Songwriter Universe, the music of Earth, Wind & Fire is a “joyful noise.”

“Being joyful and positive was the whole objective of our group.  Our goal was to reach all the people and to keep a universal atmosphere — to create positive energy,” White said.  “All of our songs had that positive energy.  To create uplifting music was the objective.”

As we remember the groundbreaking talent of the multi-talented Maurice White, drummer, music producer, songwriter and singer, let’s groove on into a new week by listening to Earth Wind & Fire perform their classic hit “September” released in 1978

20 Things We Need To Say