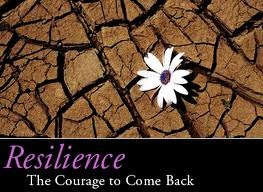 There are people in my life that I call  my “foxhole people.”

These are the family and friends that I would want next to me were I fighting a “war” involving a personal crisis and I found that I needed support to get through my “combat situation.”  I know that these people would instantly jump into the foxhole with me and they would stay with me through thick and thin until it was over.

It doesn’t matter who these people are, what matters to me is that I know the people who would do this for me and that I would do the same for them.

I know that you also have at least one or two people like this in your life.  You may not call them “foxhole people” but they are people who have your back and you have theirs.

These people share certain traits.  Obviously, they’re committed to you and me and they care about us.  But I think it would also be fair to say that these people are emotionally resilient.

According to Joan Borysenko, PhD, and a noted lecturer on health and spirituality, emotionally resilient people believe there is a higher purpose for even the most painful event.  That doesn’t mean that they think it’s good to have problems, it’s more about the ability they have to see that something positive can come out of a negative event.

Think just a little bit about this interesting idea.  When something bad happens in your life, is it the end of the world for you? What is your usual response to emotional stress?  Do you immediately think the worst?  Emotionally resilient people do recognize that even though things may initially look and feel bad, some good can come from even the most traumatic events.  Resilience can be developed within yourself.  If you actively want to become more resilient, it is possible.

Borysenko is a former cancer cell biologist at Harvard Medical School and she is author of Minding The Body, Mending The Mind and A Woman’s Book of Life.  She has spent decades studying emotional resilience and here is a short synopsis of her journey:

“When my dad killed himself in 1975, I felt not only grief but also terrible guilt.  As a cancer biologist, I felt I should have done a better job of helping him endure the difficult treatment process he was undergoing.

But I refused to give into despair.  I told myself that if I could help even one other family avert such a tragedy, my father’s death would have meaning.

I quit my job at the lab and retrained as a behavioral medicine specialist.  Then I founded a mind/body clinic at one of Harvard Medical School’s teaching hospitals, beginning a new career helping patients and their families cope physically and spiritually with life-threatening illnesses.”

Borysenko also recounts that a friend of hers also went through something similiar when her son died in a car accident.  To survive the incredible pain of losing her son, her friend forced herself to think about other families and what she could do or how she could give something positive in her son’s memory.  She now volunteers as a support group facilitator, giving emotional support to other parents who have suffered the tragedy of losing a child.

It is the meaning that we give to awful events in our life that allows us to endure the deep pain and come out on the other side of it a stronger, more resilient person.  While we cannot control what happens to us, we can work on our response to those events.
Share this post:

She Works Hard For The Money

Being A Fruit Loop