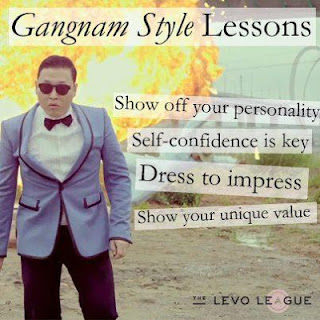 I’m taking a break today and enjoying the popularity of “Gangnam Style.”
“Gangnam Style” makes me laugh and laughing helps you cope with life.  Laughter is very powerful medicine and I try to use humor as much as possible to get through the ordinary hassles and crises I face.
Courtesy of The Levo League, I saw the above picture yesterday posted on the company’s Facebook page and had to share it!  The man pictured in the blue tuxedo jacket is South Korean rapper Psy.  I didn’t even know rap existed in South Korea but there you go!
The “Gangnam Style” song and video are a hoot and I bet you’ve seen Psy’s dance moves imitated by everyone from Britney Spears to the Royal Thai Navy.  If this somehow got past you, then please Google the hit song and check out the popular video on YouTube where it has been viewed over 470 million times.
Basically, “Gangnam Style” is poking fun at people who are trying hard to be something they are not.  Gangnam is a district in Seoul, Korea where people are wealthy and supposedly hip.  According to Wikipedia, Psy likened the Gangnam District to Beverly Hills, California, and said in an interview that he intended a twisted sense of humor by claiming himself to be “Gangnam Style” when everything about the song, dance, looks, and the music video is far from being high class.
The Levo League, which is an online social and recruiting network based in New York City, offers a wide variety of multi-media career resources to young women and it took the “Gangnam Style” themes one step further to make the point that being confident is positive and one of the essentials in building a career.

The Anger of Losing Someone

A Letter to Hallie Biden