“I think every woman should have a blowtorch.”
“Always start out with a larger pot than you think you need.”
“I would rather eat one tablespoon of chocolate russe cake than three bowls of Jell-O.”
Only one woman could have said all three of these fabulously witty things and that is Julia Child!
Child, the infamous American chef who also worked as a spy for the U.S. government during World War II, would have turned 100 today (she died in 2004) and restaurants from coast to coast are celebrating her landmark birthday by offering special parties and menus.
Child was truly an original and had a zest for life that was contagious.  I write about her today not only because of her extraordinary birthday but also because she served as an uplifting example of a woman who had tremendous resilience.  She suffered many disppointments in her personal life but she never let it get her down.  She forged on and became the author of many books and the energetic cooking teacher we know and love.
Personally, I have found that sometimes cooking can mentally take you out of yourself when you are in the midst of trying to figure out what life has handed you and in turn, the mixing, the measuring, and the spontaneous chemistry of cooking can go along way in creating harmony and healing in your beat-up soul.  Plus, you could end up with a great meal!
Speaking of great meals, last week I celebrated Julia Child’s birthday a little early with three of my very good friends (VGF’s).  We had the unexpected pleasure of tasting one of the special Julia Child menus offered at Ris, a delicious and charming Washington, DC restaurant owned and operated by the award-winning chef, Ris Lacoste.  We were treated to this oh-so appropriate Julia Child lunch at Ris by one of my one of my VGF’s because she wanted to thank us for helping her when she accidentally fell and broke her arm and hit her head on a sidewalk (A Huge Ouch!!!!!) not too far from Ris.
It was tramatic at the time but now we are all very happy for her that she has healed as quickly as she has and is back to working and driving.  With her cast off, she proudly showed off the scars on her arm from the operation she had to have to stabilize the bone break.  It was a double celebration lunch — friendship and Julia Child’s birthday!! So perfect!! 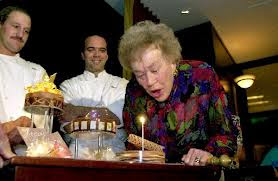 Bon Appetit and Happy Birthday Julia!!!!!!!!!!!
Ris’ menu was entitled, “All Things Julia” and here is a copy of the lunch menu:
LUNCH
Vichyssoise

Sole Meunière
with lemon brown butter and parsleyed potatoes
“We rolled to a stop in La Place du Vieux Marché, the square where Joan of Arc had met her fiery fate.
There the Guide Michelin directed us to Restaurant La Couronne.”

(vegetarian)
Dueling Meatloaf
with mashed potatoes, summer squash with tomatoes and mushroom gravy
Taste Julia’s and Chef Ris’ meatloaf renditions side by side!
~ ~ ~ ~ ~ ~ ~ ~