It’s also an insightful movie about the ups and downs of female friendships.

Multi-talented comedian Kristen Wiig plays Annie, a 30ish, single young woman who has hit a rough spot in her life.  Nothing is working.  Her boyfriend uses her, she gets fired from her job, her car breaks down all the time, she moves in with her mother and on top of all that her best friend is getting married.

I could go on and on about all the hysterical scenes in this movie but I won’t.  If you’ve seen the movie, you know which ones I mean and if you haven’t, then run out and rent it.  The surprise for me was that in the middle of this over-the-top comedy is a touching scene that addresses the choices a person faces when they feel they’ve hit bottom and life as they think they know is pretty much over. 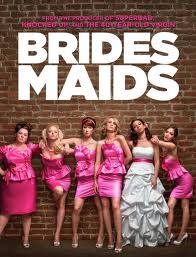 The scene is a tipping point of sorts for Annie.

Annie is lying on the couch in her mother’s house, feeling like a major loser.  Megan, a fellow bridesmaid played by the incredible Melissa McCarthy, comes to visit her and shake her out of her funk.  Megan jumps on Annie and starts to physically push her around and punch her.  “This is your life Annie,” Megan says and continues hitting Annie until Annie finally pushes back.  Megan tells Annie that no matter what else is going on that she is her friend.  And as her friend, Megan is glad to see that the real Annie is in there somewhere even though she’s having a pity party for herself.  “You are your problem,” Megan says.  “You are also your solution.”It may sound harsh but I think we know that Megan’s on to something.  If you’re not willing to stand up for yourself then what does that say?  Really, now, think about it.  I know it’s much easier to deflect the blame and say it’s your circumstances, it’s not your fault and life is picking on you.  That makes it easy all around because then you don’t have to take responsibility.  You’re more like a pinball being pushed around in the machine of life than an adult.

Life has handed you a loss and it hurts.  Give yourself time to experience the depth of your loss.  It’s okay to feel sorry for yourself  but then there comes a point where you have to put the brakes on those feelings and push yourself forward.  Megan may not have picked the nicest way of getting her message across but she is right about one thing.

The solution is in you.

A Healing Circle of Life

In With The New