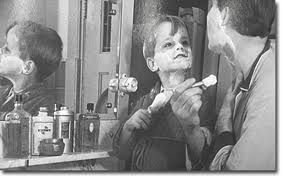 I was shopping the other day at the local drugstore for Christmas stocking stuffers for my son and browsing among all the different shower gels being sold for men.  I was trying to figure out which one my son would use when my eyes traveled over to the section displaying men’s razors.

Ahhh..men’s razors.  I was reminded of a period of time right after my husband died.  My son was 13 years old and in the eighth grade.  A tricky time under the best of circumstances.  He had grown some stubble on his face but I didn’t think it was enough for a razor.  I was new to being Mommy and Daddy and I was unfamiliar with how this was supposed to work.  I had bought shaving gel for my husband hundreds of times when I was at the grocery store but my husband had always bought his own razors and blades because he was particular about what kind he used.  I think the only thing I knew for sure about men’s razors was that I shouldn’t borrow them to shave my legs because guys hate that.

Shaving is a Father’s territory.  Fathers are the ones who usually teach their sons how to shave so they don’t cut their faces and walk around with pieces of tissue stuck on it.  But this was the first of many situations where I would need to talk to a guy to figure out what would be best for my son.  I now see that the facial stubble was his body’s way of telling me that he was leaving Mommy World and crossing the proverbial bridge over to Male World.

Shaving is a male milestone.  Little boys are always looking in the mirror, putting shaving cream all over their face and pretending they are shaving just like their Dads.  I don’t know what I was waiting for but I’m so glad that the father of one my son’s good friends brought it to my attention. 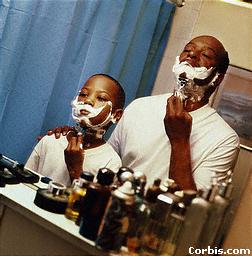 We were sitting on the bleachers during a school basketball game, cheering and yelling and talking all at the same time.  Between scores and penalty buzzes, we were watching our children run back and forth across the basketball court.  As we talked, he casually said something along the lines of, “I just got my son his first razor and I don’t know if you’ve noticed but your son is ready for one too.”

He had my full attention at that point.  If I had a daughter, I would know exactly what physical signs to look for as her hormones kicked into gear and what do to when I saw them.  But I was now in unfamiliar territory as a parent and I needed other parents in a way I hadn’t before.  Since the day I learned I was pregnant, I have always enjoyed commiserating with other parents.  As parents, we’re always comparing stories and experiences, mentally filing away what we think is good solid advice to be used at a later time, and deleting the stuff we don’t think pertains to our children.I will always be grateful to this father, and our bleacher conversation opened the door to lots of talks with male friends and relatives about guy issues.  I don’t know what it feels like to be a little boy, a teenage guy or a young man.  I did follow up on his advice and went to a close male relative who jumped at the opportunity to take my son shopping for his first razor.

It was bittersweet when they came home from their shopping trip and showed me what they bought, but I was also comforted by the knowledge that I know some special men who are enthusiastic about helping me and my son.  Being a parent is already  unpredictable enough all on its own.  When you find yourself in the position of being Mom and Dad by yourself, it’s all about reaching out to other parents and putting your child’s needs first. 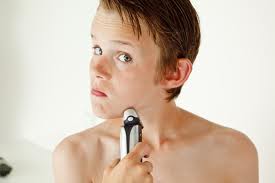 College Rejections Are Not The End Of The World