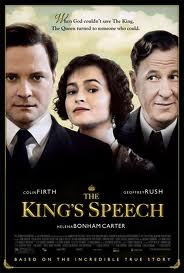 I’m probably one of the last people to see the Academy-award winning movie, “The King’s Speech,” before it goes to DVD, so please bear with me while I applaud this special film and what I learned from it.

This incredible movie tells the true life story of England’s King George VI and his unexpected ascension to the throne; all the while desperately working to overcome a painful and frustrating stutter.  The story works on so many levels it is hard to know where to begin but I think the story itself is so human and would still be powerful even if it were about George the Common Man instead of George the King of England.

You don’t have to be royalty to be abused by a nanny, have a bad relationship with your father, or be made fun of constantly by an older brother.  These are just some of the scarring emotional issues that contributed to George’s stuttering and they could happen to anyone.

What “The King’s Speech” shows us is George’s constant courage and the friendship that develops with his extraordinary speech therapist, Lionel Logue.  By building up George’s confidence and trust, Logue guides and coaches him until George eventually becomes a more confident public speaker thus finding his voice and leading Britain through a world war.

The idea of finding your voice is what stuck with me after seeing the film.

Finding, discovering or changing your voice at any time in your life is not an easy task but especially after the loss of a loved one.  Don’t let the degree of difficulty intimidate you or stop you from trying.  Just as George plugged away at overcoming his stuttering, the work of grieving also needs to be done.  Yes, it is hard and yes, it does hurt but pain is part of the healing process.

Putting it off, trying to tamp it down within yourself or ignoring the pain will only make it worse.  Acknowledge the pain or it will come back to you at some point.  You have to know that eventually you will have to deal with it and resolve it in some fashion.  Unfortunately, there are no quick fixes.

Essentially, when you become widowed, you too are trying to find a new voice for yourself.  Much of your identity and routine were intertwined with your spouse and it’s very hard in the beginning to know where to start.

In my case, I didn’t have the luxury of trying to figure out which way to go.  I needed to keep working and I needed to raise my son.  So that was that and those two things took up all of my energy.  Every day was a matter of putting one foot in front of the other and just doing what needed to be done.

But for other widows and widowers whose children are raised and grown, I can see how hard it would be to try and figure out your new voice.  As one newly-widowed woman said, “Even though I was doing the same things as before, such as grocery shopping, everything was different; I was now only shopping for one.  In fact, when I tried to go to the store where my husband and I shopped together, I found that it was too difficult.  I had to change to a different supermarket in order to better care for myself.”

Everybody finds different sources of support and you will too.  It could be through writing a journal or writing a letter to the person you loved and just lost.  Grief support groups are another important resource and can also be helpful.  By sharing feelings with others in the group, you learn you are not alone and others are also struggling to rebuild their lives.  You may also find that being with a particular person or people is soothing and helps you feel more connected.

You will know what works best for you and in time, just like George, will find your new voice.

One Response to “Finding Your New Voice”

Look To This Day