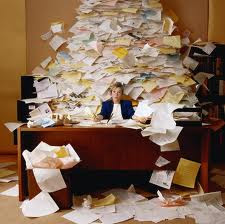 I mentioned in yesterday’s post that I’ve started going through a number of boxes of papers that once belonged to my husband.
For those of you who have found yourselves responsible for the belongings of a spouse, friend or relative after they died, you know this is not a straightforward process.  Each of these boxes I have decided to examine is potentially an emotional minefield because I don’t know what’s contained in them.  My husband filled them up and now they are waiting for my attention.
You might be thinking, “It’s just old papers.  What’s the big deal?”  Since my husband was a reporter/writer/editor, these papers aren’t the same kind of papers you might let pile up on your dining room table and then throw into a box.   I need to read the papers before I decide to throw them away.  These papers could be old stories he wrote or memos he wrote or ideas he jotted down on the fly.
I’m sure it sounds rather lazy of me that I have let these boxes hang around for eight years and I have yet to go through them.  In a perfect world, I would have already sifted through all of the papers, tossed the ones that don’t mean anything and read the ones that mean something and either filed them away or given them to a family member.
But, this being an entirely imperfect world, some of the boxes have been in a closet and some have been under a table in my home office.  I have attempted to go through them many times before but I would always come upon something frustrating g and then had to stop.  Sometimes I would open the boxes up just to remind myself what kind of stuff was inside.  If the papers on top were computer printout of stories from websites or printouts or newspapers from years ago, then I made a lot of progress and started throwing things away.
The hangups usually start when I find bev naps (short for beverage napkins in restaurant speak) with his hand writing on them and I start to read them or just stare at his handwriting or try to figure out why he wrote what he wrote.  Or I find a work email he printed out that is a record of a particularly funny incident or a particularly annoying disagreement he was having with a colleague.
Some of these papers are priceless and some of them are oh-so-painful.
I can hear his voice in my head as I read some of the notes and I have responded to him by saying, “Why did you leave all of this here for me to clean up?  I really don’t know what to do with it.  I wish you had thrown it away when you had the chance.”
And then, just as I am exasperated by the whole tedious process of it, I’ll discover a real nugget of information that I have never seen before and can’t wait to share with his children: a yellowed and wrinkled page from the December 8, 1967 Congressional Record showing that one of his stories was inserted by a senator.

I didn’t see that one coming at all!

One Response to “My Paper Chase”