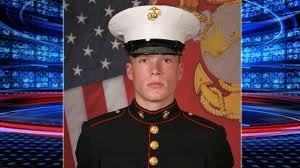 As we prepare to celebrate the Fourth of July by setting off fireworks, grilling hot dogs and hamburgers and mixing the traditional summer potato salad, let us pause and quietly remember the bravery of one young man who heroically fought overseas for his country, making it possible for us to celebrate this patriotic holiday.
One young man by the name of Niall Coti-Sears.
Life, liberty and the pursuit of happiness.
Sadly, in pursuit of protecting those ideals, Lance Cpl. Niall Coti-Sears, 23, was killed in Helmand province, Afghanistan, two weeks ago while conducting combat operations, according to the Department of Defense.
American military families can never be thanked enough for the sacrifice and hardship they experience as their loved ones travel thousands of miles away and put their lives on the line every day so that we can have freedom and democracy in the United States of America.
Stories about the war in Afghanistan and details of battles and body counts are written about in newspapers and broadcast on air but the majority of us have become numb to the constant reports and hardly pay attention.  We forget that America is still fighting a war in Afghanistan until the tragic reality hits home.
War is not something that happens to someone else’s kids — it happens to the young men and woman who live in our community.  It happens to men and women who went to school with our children and to the families you see in church or in the grocery store every week.
A couple of summers ago I was introduced to Niall Coti-Sears at a friend’s Fourth of July party and we all stood around while he talked about how he had just joined the Marines.  Niall went to school with the son of one of my best friends and I remember looking at him while he talked with the group about how much he loved the Marines and thought to myself, “Oh my God, he’s so young.”
William Coti, 81, a retired Marine colonel who served in Korea and Vietnam, is Niall’s grandfather.  William Coti told The Washington Post that Niall’s patrol was ambushed and that Niall died of wounds received in the attack.
My heart and prayers go out to his mother, Susan Coti, for I will never imagine the depth of what it feels like to travel to Dover Air Force Base to claim your son’s body.  But I also offer my humble thank you for having a son so brave, so heroic that he fought and gave up his life for the United States in Afghanistan.
This link will take you to the story that Fox 5 News aired on Niall Coti-Sears:

Lean In To Laughter