You never know what the U.S. Postal Service will bring your way.

Last night I arrived home late.  It had been a long day at work and I was tired and hungry.  I have a mail slot in my front door so when I open it to enter the house, the mail is usually scattered all over the floor.  I bent down, gathered it all up and starting looking at what was delivered.

It was the usual assortment of flyers, magazines and a couple of envelopes, one of which was particularly thick.  I turned it over and saw that the return address was from the law firm that handled my will, as well as the will of my late husband.  Imagine my surprise when I saw that the envelope was addressed to my late husband, plus in capital letters, right under his name it said “PERSONAL” and “CONFIDENTIAL.”

“What the hell could this be about?” I thought to myself.  “He’s been dead for eight years.  What could they possibly be sending him?”  Of course, I knew right away that whatever it was that was inside the envelope was a mistake but I was really intrigued to find out.

I figured it was going to be a bill of some sort.  You’re probably thinking the same thing.  You know how it works.  Somehow, the company or in this case the law firm, “forgot” to charge you for something and then years later a bill appears.  This is what I thought happened to my husband.  Now, eight years later, after he died and the firm executed his will,  they were actually sending him a bill. 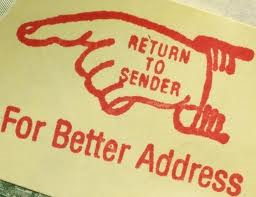 Not so.  I was wrong.  There was no bill.  I opened the envelope and inside was a letter and a small booklet titled, “2010 Tax Law Highlights.”  I started to laugh.  What a waste of paper and postage.  The letter was even funnier because in capital letter across the top is said “ESTATE PLANNING ALERT.”  How can you alert someone who isn’t even here and thus has no estate?

If this had happened a number of years ago I probably would have been upset and cried.  But now I actually see the humor in it.  I can’t even tell you what my husband would have said if he was alive because there would be too many four letter words in the sentences.  I’m sure there are many of you out there who still receive mail with your late spouse’s name on it.  Maybe the person’s name is on a piece of mail you receive regularly and you even find it comforting.

But this piece of mail was unexpected and hysterical.

I guess Benjamin Franklin was right.  Nothing is certain in life but death and taxes.