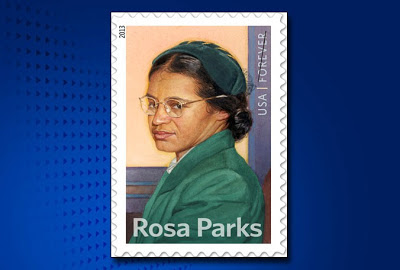 When I read that the U.S. Postal Service unveiled a stamp commemorating civil right activist Rosa Parks, I said to myself, “It’s about time.”
Parks, who would have turned 100 this year, was riding a segregated and crowded bus home in Montgomery, Alabama in 1955 when a white man wanted her seat.  She refused to get up and give it to him and she was arrested for breaking the law.
A 381-day bus boycott began, lead by a young Baptist minister named Martin Luther King Jr.  Both Parks and King went on to capture the nation’s attention for standing up and leading the national movement for civil rights.
Parks appealed her arrest taking it all the way to the U.S. Supreme Court which then ruled that bus segregation was unconstitutional.
By quietly saying, “No,” look what Parks achieved.  She is truly inspirational!  Through her simple action she inspired thousands of others to demand a better life for themselves and their children.
Sometimes we want change to happen immediately; just as soon as we are sick and tired of something.  But other times, change happens incrementally, through one person after another agreeing with each other, bonding together and making their voices heard.
Positive thoughts can be powerful.
What would you like to change in your life?
Share this post:

To market, To market