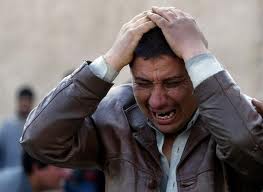 Anger is a normal part of grieving.  It is.  I know people would rather not address this part of grief but it’s there and it’s best to find a way to come to grips with it.  When a loved one dies, many people feel anger first rather than sadness because they feel they are being left behind and also feel very helpless.

Everyone says that life must go and it does but what do you do with the anger you feel?

Many people try to push the anger down and ignore it because the intensity of it scares them.  That’s not going to work because eventually the anger will pop up at another time in a situation that has nothing to do with the person’s death.  Intellectually you know that your loved one did not have control over the situation but that doesn’t stop you from feeling something different in your heart.

Go ahead and feel the anger but you must not hurt yourself or someone else.  You have to find a way to let it out in a constructive manner.  Whether that means that you yell into a pillow, break dishes or rip clothes, feel it and express it.  Otherwise, it’s going to stay inside you and build up until you reach a boiling point.  If you find your anger to be beyond what you can handle, you may need to find a support group or go to a grief counselor to address it and work your way through it.

I recently found this very good first-person piece on anger and loss published recently by Hello Grief (www.hellogrief.org) and thought it would be helpful to share:

Loss and Anger
By Victoria Noe

Posted By Hello Grief on January 10, 2012
Anger can be unattractive, there’s no question about it. It’s messy and unpredictable, sometimes loud and violent. And in a world where we like things to make sense, it’s often unacceptable. But never more than when you’re grieving. There’s a long list of people we can be angry with:
The person who died: why didn’t they take better care of themselves? Why did they take such a stupid chance? What were they thinking?

The medical community: why didn’t the doctor force them to take better care of their health? Why didn’t the paramedics get there sooner? Why hasn’t someone discovered a cure for cancer, etc.?

God: why did you make a good person suffer? Why did you leave those children without a parent?
Why them? Why now? Why not someone else? Why not me?

The family: why didn’t they make him go to the doctor? Why did they let her live alone?
Why?

Death is, after all, the great unknown. Despite stories of white lights and visions of deceased relatives, no one’s come back from any extended time in the afterlife. We don’t know what awaits us.

And we REALLY don’t know why people die when they do. We say “it was just their time,” and obviously, it was. As a friend, that sense of helplessness can create even deeper anger.

Many times when I’ve grieved I’ve been angry, although I rarely shared those feelings. Despite being one of Elisabeth Kubler-Ross’ famous stages of grief, it’s probably the least acknowledged.
Anger can be useful, but when turned inward, is more likely referred to as depression. That’s not what I’m talking about here. I’m talking about white-hot, body-shaking, screaming-at-the-top-of-your-lungs anger.
You’ve already realized that the grief you feel for your friend is being devalued because you’re not family. And that can add to the anger you already feel.
Even those who are also grieving are unlikely to accept your anger. Think of Sally Field melting down in the cemetery in Steel Magnolias, and the shock on her friends’ faces. The minister in The Big Chill – “I’m angry, and I don’t know what to do with my anger” – is much calmer about it, but the look in his eyes is anything but.
The problem with suppressing the absolutely justified anger we feel when a friend dies is that it will bubble up eventually. It will present itself suddenly and loudly and often in a completely unrelated situation. And that presents its own complications. Screaming at a barista who doesn’t know you won’t bring back your friend.

So, if you’re angry that cancer treatments and cures came too late for your friend…

If you’re angry that your friend drove drunk…

Embrace that anger: accept it and embrace it. You’re angry because of the pain that your friend’s death has caused. That’s, dare I say it, normal. Frankly, it would be strange if you weren’t angry. You’re angry because you loved them and wanted them to stay close to you always. Selfish maybe, but normal and human.

So, as long as you don’t hurt yourself or anyone else, you have my permission to be angry. Then you can work on channeling your anger into positive action, to keep your friend’s memory alive every day of your life.

Guest author Victoria Noe created FriendGrief [2] to discuss the idea that there are profound differences in grieving the death of a friend, as opposed to a family member. While she writes on the loss of friends, her ideas can often apply to any individual who has suffered any type of loss.

Wearing Of The Green