Over the past several weeks, my neighborhood has lost electrical power several times for varying periods of time.

Maybe you’ve read about the very sudden and very strong storms that recently have hit the Washington, DC area.  It’s been very scary and frustrating.  We are still recovering from the last storm that hit over a week ago: some people in Bethesda and Rockville, Maryland are still without power and have been without power for over a week.  Pretty unbelievable right?
You should read the news stories and tweets about PEPCO, the area’s local utility.  PEPCO was recently listed by Business Insider as the number one “most hated company in America.”  Oh yeah, by the way, PEPCO has proposed a 5% rate increase for the District of Columbia and a 4% increase for the state of Maryland.  Definitely no love there! 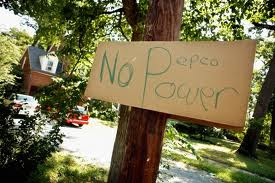 It’s a funny thing about losing power in your house.  For some reason it doesn’t really hit you at first what you can and can’t do.  For example, when I first lost power, my thoughts immediately went to this: “I should go on the computer and report this to PEPCO.”  Not.  And then I thought about cooking something in the microwave.  DUH!! How can I go on the computer or use the microwave when I don’t have any electricity?

The first storm was so powerful it blew my cable box out.  I didn’t have television for 7 days.  I missed watching TV mostly in the morning when I wanted information about traffic jams and the weather before I went out the door to work.  But I also found that when I didn’t have TV, that I spent my evenings more productively.
I admit there are times when I just automatically turn on the TV.  It’s just a bad habit.  The power outage made me rethink what I was doing.  No power, no TV.

Instead of mindlessly lounging in front of the TV after work, I was doing a lot more reading, organizing around the house, talking to my neighbors and yardwork that I had put off.  I listened to the radio for news but only when I needed to.  It wasn’t blabbling for hours at a time.

I recentered myself and I felt I was more engaged with my daily routine.  I found I had more creative and had quiet time.  Quiet time is so important because it allows you to untangle your thoughts. A frantic mind is what causes stress.

Watching television is passive and I think I was turning on the TV after working all day because I didn’t want to think anymore.  Does that make sense?  I thought TV was helping me relax but it really wasn’t.

The heat wave in DC is going to continue for awhile this summer and I do expect to lose power again because that’s the nature of the service we get from PEPCO.  But the next time the lights go out and I grab the rechargable flashlight and candles, I won’t worry about what program I’m missing on TV because I wasn’t watching it.

A New Project on Amazon