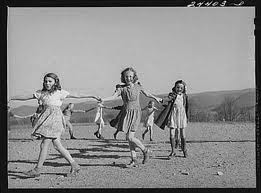 When life hands me a difficult situation, I think about my Nana and wonder how she would have handled it.

My Nana gives me strength and inspiration because she lived a good and simple life. She and my Pop-Pop raised five children (including my mother) during the Depression on as much as $58 a week and for awhile on nothing because my grandfather lost his job.  During the time that there was no paycheck, they lived on canned goods that a relative got for free and and managed to keep their house and continue to feed and clothe their children. There was no extra money for luxuries such as eating out and there was no whining or complaining about the lack of extra things in their life.
You were lucky to have what you had and you were thankful for it.  That attitude put life into perspective.  The Depression brought about a lot of humility and respect and everyone helped each other.

Nana would always say to her 40 grandchildren that it was important to remember that it doesn’t matter how much you have or what you have but you should take care of it and it should be clean.

She was really big on things being clean.  I’m not sure what she would think about the containers of wipes that people buy these days in the grocery store and use for babies and for cleaning.  She probably would think it was a waste of money and would rather use a cloth rag and soap.
When we went to visit Nana, she would greet us at the front door with a wet wash cloth and wipe each of our hands before we came into her house. She would hold our hands in hers, smile at us and giggle a bit while saying, “Sticky fingers! Sticky fingers!” I never thought twice about her doing this funny routine with us. It was just her.
She was an unusual woman and we all respected her so much!  I recently received these modern beatitudes from a friend and thought that some of them were close to something Nana would say:

Happy are those who know how to laugh at themselves, they will never run out of amusement.

Happy are those who know how to distinguish between a mountain and a mole hill, they will be spared much trouble.

Happy are those who can be silent and who can listen, they shall learn many new things.

Happy are those who know how to take little things and serious things peacefully, they will go far in life.

Happy are those who can admire a smile and ignore a frown, they will travel in sunshine.

Happy are those who think before acting and who pray before thinking, they will avoid much foolishness.

Ways To Change the Holiday Menu