And then there are acts of love that people randomly do that are often so selfless as to take your breath away.

Upon reading the healing and tender story from Associated Press I am sharing below, I think it definitely fits into the category of giving when it hurts.

Nothing so publicly represents your marriage to another person as wearing a wedding ring.  Whether it’s a diamond or a simple gold band, a ring on your left hand symbolizes an emotional commitment you made to another person.  You are telling everyone that your heart, soul and very being belong to someone else.

This is a HUGE issue for widows and widowers.  Technically, you aren’t married anymore when your spouse dies but of course you still feel married.   I know lots of widows who continue to wear their wedding rings and would never think of taking them off.  And that’s okay.  It’s a personal decision and you have to listen to your heart and do what you think is best for you.

And that’s exactly what Lovely Boston Widow did.  She listened to her heart and what a special gift she selflessly gave to help make someone else’s Christmas a little bit brighter.

Here is the story: 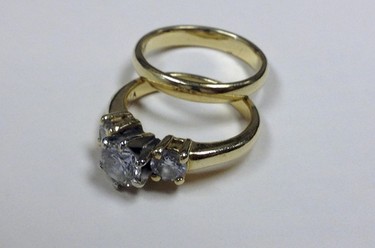 In this Thursday, Dec. 4, 2014 photo provided by The Salvation Army, a diamond ring, valued at $1,850, and a wedding band, that were placed in a red donation kettle, rest together near a donation note, right, in Cambridge, Mass. The Salvation Army said the rings, given by an anonymous widow in honor of her late husband, were accompanied by the note in which the woman said she hoped they would be sold and the money used to buy toys for needy children. (AP Photo/The Salvation Army, Salvation Army Lt. Michael Harper)

BOSTON (AP) — The Salvation Army found an unusual surprise inside one of its red donation kettles: a diamond engagement ring given by a widow in honor of her late husband.

The charity said Monday the anonymous benefactor placed the diamond ring — valued at $1,850 — and her wedding band in one of the kettles placed outside Boston’s North Station last week.

It says the rings were accompanied by a note in which the woman said she hoped they would be sold and the money used to buy toys for needy children. She said her husband always had a giving spirit — especially at Christmastime.

“To honor his memory, I donate this ring. I’m hoping there’s someone out there who made lots of money this year and will buy the ring for 10 times its worth. After all, there’s no price on love or the sentimental value of this ring. But money will help the kids. May everyone have a Merry Christmas, Happy Holidays and Happy New Year!” her note read.

“We’re so moved and incredibly grateful to the generous individual who made such a loving and kind donation,” Davis said. “This heartwarming gift boosts all of our staff, bell-ringers and volunteers.”

The Salvation Army says the red kettles date to 1891, when Salvation Army Capt. Joseph McFee wanted to help feed the needy in San Francisco. The containers were modeled after those McFee saw at ferry landings in Liverpool England, where people would sit with small kettles and collect spare change from travelers.

Your Dad Is Here

Within The Morning Light