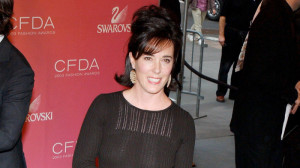 “Oh My God.  Have you heard about Kate Spade?”

“I’m so sad and mad about the Kate Spade news.  How could she do that?”

Kate Spade’s recent and surprising death is a tragedy on so many levels: that she lost her battle with depression and sadly committed suicide, that she left behind a daughter who is at the tender age of 13 and that we will no longer be the enthusiastic recipients of her amazing talents as the uber-popular fashion designer of purses, jewelry, shoes and other items that helped us celebrate our lives and give an emotional boost.

It is no small thing that stories abound on social media and newspapers and television about how women saved up for their first Kate Spade purse and what it meant to carry it around and use it until it fell apart.  Kate Spade understood that women were looking for a bit of whimsy in their busy lives; something to make them feel unique and different and put together.

Many years ago, I received Kate Spade’s Make Headlines canvas tote as a gift.  It always made me smile for the headlines on the tote are playful and humorous: “Arboretum Grants Free Admission to Stop and Smell the Roses” and “Officials Report: Wanderlust is Spreading.”

My heart goes out to Kate Spade and her family during this dark time.  The deep sadness that I, and dare I say millions of other people, feel about the circumstances of her death relates to the fact that she was a highly successful woman with a family who one would think had easy access to resources that could help with her depression and other demons that she might have been battling.

Kate Spade’s life seemed glamorous on the outside but there is also an unbelievable amount of pressure that comes with Kate Spade’s level of success.  Interviews with friends and family members said that she didn’t want the public to know about her depression because she was afraid it would hurt her business.  I would imagine that when you are creating products that the public adores and the creation of those products gives jobs to thousands of people, your image is something you want to fiercely protect.

It is easy for me to say that I think the public would have embraced her even more had they known of her depression.  Kate Spade had a loyal following that I think would have seen themselves in her and would have been able to separate her beautiful products from the personal turmoil she was trying valiantly to handle.

I read one woman’s comment yesterday on a friend’s Facebook page which said, “I feel that what people are trying to express is if someone has great wealth, access to the best health and mental health care in the world and ends up taking their life, what hope do the rest of us have?”

What hope do the rest of us have?

Well, I would say that hope for the rest of us can be found in each other.  In our humanity.  It’s not a matter of money, fame or any of that.  It is about how we connect to each other.  Or maybe how deeply we want to connect to each other.  It is truly sad that someone’s death is the reason we open up and discuss how to offer emotional support to someone who is thinking about taking their own precious life.

For instance, I had a a conversation yesterday with a woman I have known for many years.  We started talking about Kate Spade and then our conversation surprisingly evolved into her revealing that both of her sisters had committed suicide.  I had no idea that both of her sisters had ended their lives in this sad way.  By sharing this personal information with me and revealing her vulnerability, an unfiltered dialogue opened between us about grief experiences, counseling, deaths and how we have found healing.

We’re all human beings and that can be messy; as in our conflicting emotions can take us all over the place and maybe we really aren’t sure how we feel.  We just need someone to stop and listen to us.  Not to solve our problems.  But to simply acknowledge that they are aware of what is happening to us and that they care.

One of the biggest mistakes we can make when feeling bad or down is to isolate ourselves, which can often make a bad mood feel even worse.  Even when you don’t want to call or text someone, it is healthier to push ourselves to reach out to a person we trust and let them know what’s going on.  You may feel you are alone but I hope that you know that there is always someone ready and willing to help you.

If you are having thoughts of suicide, call the National Suicide Prevention Lifeline at 1-800-273-8255 (TALK) or go to SpeakingOfSuicide.com/resources for a list of additional resources.

Kate Spade, you will be dearly missed.

The Kindness of Nurses