This month would have marked the 25th anniversary of our wedding if my husband was still alive.  I wonder if he knows?  If things had turned out differently, I’m sure we would have thrown a big party for our family and friends to help us celebrate 25 years flying by since we first said “I do” to each other.

I looked at the calendar this year and thought about all those other anniversaries.  Of course, I haven’t celebrated a wedding anniversary for the past eight years and, truth be told, some anniversaries were more fun than others.  I think that’s true for every couple because it’s just part of the emotional roller coaster of being married.  But the important thing was we always tried to make time to do something special, remember that eventful day and reminisce about the wedding itself.  We had such a good time at our wedding that after the reception ended we joined a group of our friends who were going to a local bar to continue celebrating. 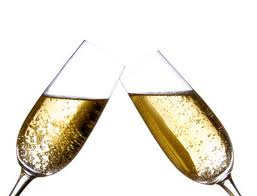 For our first wedding anniversary, I made the dinner reservation and I put a lot of thought into trying to find a place neither of us had been before.  I wanted to find a restaurant where the food was delicious, the atmosphere was comfortable and romantic but it wasn’t too expensive.  I thought I had done well but instead I had flunked reservation making big time.  We walked into the restaurant and my husband didn’t like it AT ALL.  Since I didn’t really want to go through that again, we agreed that in the future, he could make the anniversary reservations.

Fast forward to the wedding anniversary that arrived just after my husband died, and I was emotionally drained.  I didn’t really feel anything except numb – just as though I was walking through cotton candy.  Life’s daily routines were definitely surreal.  The next year was much harder for me because as silly as it sounds, it took me about a year to really absorb the fact that he was gone.  In that first year, I still was sort of looking for him.  Once, I was driving the car to the grocery store and I saw a man walking on the opposite side of the street with the same physical build as my husband,  dressed in the same uniform my husband wore: khaki pants and a denim shirt.  In that split second I thought it was him.  I remember there being something about the way the man walked that made me do a double take.  I had to pull into a parking lot and collect myself.

25 years. . . how could it be?  We were married for 17 years before he died and we had known each other for three to four years prior to getting married.  He was my best friend.  I recently browsed through the album of wedding pictures and shut it after a few pages.   The flood of emotions was unsettling.  In some ways, it felt as though it happened yesterday but it also it felt like a dream.  Did that really happen to me?  Is that really me in that wedding gown?  My God, we took so much for granted.

Now the date is a day without rituals but I still have my memories.

Aer Lingus — Take Us Away