It’s one thing to forget to turn your cell phone off and then have it ring while you are in church, in a job interview, at a funeral or in a theater, but it takes some major manipulation of a person’s ego to actually answer it while they are in those places.
Right?
Someone I didn’t know sat next to me during a play and her cell phone started ringing.  I immediately looked at her and she started searching her purse to find the phone.  I assumed that once she found it, she would just turn it off.  Wrong!! She actually answered it and started whispering that she couldn’t talk because she was at a theater performance.
Say what??!! 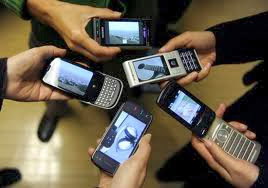 Forgetting to turn off my cell phone has only happened to me once and the embarrassment was enough so that I always check to make sure my phone is off when it should be.  I was in a large meeting some years ago with an executive of the company I worked for at that time and my cellphone started ringing.  I truly had forgotten to turn it to silent. I quickly put my hand in my purse and turned it off.  Luckily I caught it after the first ring!
But yesterday I read a story that tops everything.  Caleb Wilde, a young funeral director, posted on his blog, Confessions of a Funeral Director (www.calebwilde.com), that a colleague who is also a funeral director told him about a funeral service where the pastor’s cell phone unbelievably began to ring in the church while the pastor was addressing those gathered to pay their respects.  I don’t even want to think about the possible songs this pastor might have used as a ringtone.
As if the ringing wasn’t bad enough, the pastor then actually answered his cell phone while the service stopped and he then went on to confirm a time for a golf appointment in front of the whole congregation. Then he went on with the funeral service as though his actions on the cell phone were perfectly normal and within the bounds of good etiquette.
Not!!
How hard is it to turn off a cellphone or put the cell phone on vibrate during a funeral or anywhere else where you should not be talking?  I’m sure that the pastor probably received a few well chosen words from the family of the deceased after that church service.

Has anything similar happened to you?  I would be interested in hearing about your experiences with cell phones ringing in places that surprised you.

A Silly Ode to October