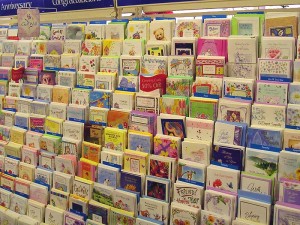 You find yourself in the card section of CVS or your local card store and you’ve been standing there for about 10 to 15 minutes scanning the cards, taking them out one by one, reading them and then quickly rejecting them and putting them back.

When that happens, here’s what I’m usually thinking: I so liked the picture or drawing on that particular card and it was so so close to what I was looking for but then when I took it out to read it, it didn’t say anything close to what I wanted to say.

Damn.  On to the next card.

And on it goes until suddenly I find a card that I fall completely in love with or I just decide to settle for one that’s not too bad because I have run out of time and need to get on with my day.

Enter the uniquely talented artist, Emily McDowell, and her studio of amazing greeting cards for those occasions that Hallmark just doesn’t do a very good job handling.

Like when life is just emotionally messy; especially during the holidays, which I think makes everything feel sharper.

So when I saw McDowell’s Five Stages Empathy Card I immediately had to have it.

This card acknowledges their immense pain and need to cry but then adds in a touching way, “I Love You.”

Of course, a handwritten message from you inside the card, maybe one or two heartfelt lines, totally personalizes what the other person is experiencing and at the same time lets them know you are with them in their time of need.

I don’t think you can underestimate the power of sending a card which acknowledges another person’s pain.  You are letting them know that they matter to you.

As Monica Lehner-Kahn wisely said, “Condolence is the art of giving courage.”

40 Ways To Lose The Clutter

Taylor Swift — Why Ya Gotta Be So Mean?

Your Dad Is Here