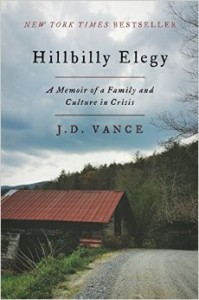 Friends and colleagues told me Hillbilly Elegy was the book to read if I wanted to gain a deeper understanding of white working class voter participation in the 2016 Presidential election.

Yes Hillbilly Elegy, a New York Times best selling memoir, does deliver compelling first person thoughts and experiences about how it feels to be white and poor and growing up in rust-belt Ohio but more importantly, it gave me unexpected insights into the ability of a young child to find the inner strength to keep going while living in trauma.

If read from that point of view, Hillbilly Elegy is an honest and sometimes raw story, one that opens the door to author J.D. Vance’s troubling and unstable childhood and how the love and guidance he received from a few family members helped him develop an extraordinary inner strength that pushed him to break away from the community he still holds dear.

Vance doesn’t hold back in Hillbilly Elegy as he takes you inside his chaotic family life and describes how it felt:  “Mom and Bob’s problems were my first introduction to marital conflict resolution.  Here are the takeaways:   Never speak at a reasonable volume when screaming will do; if the fight gets a little too intense, it’s okay to slap and punch, so long as the man doesn’t hit first; always express your feelings in a way that’s insulting and hurtful to your partner; if all else fails, take the kids and the dog to a local motel, and don’t tell your spouse where to find you — if he or she knows where the children are, he or she won’t worry as much, and your departure won’t be effective.”

Vance’s grandmother, a tough, constantly cursing, fiercely loyal woman he called “Mamaw” (pronounced ma’am-aw), is the reason why Vance is able to make it out of Middletown, Ohio.  Vance has plenty of good reasons to become depressed or chronically angry but Mamaw provides a stable place for him to live and she emphasizes how important it is for Vance to do well in school.  Mamaw’s love makes him feel special and gives him the strength work hard at school even though most kids are made fun of when they do well.  She also helps Vance find a healing way to understand his mother’s weaknesses and her self-destructive choices.

Vance’s sister is another person in his family who provides direction and love.  His father is absent and somehow Vance manages to navigate living with several stepfathers while his mother travels deeper into a world of alcohol and substance abuse.

I was fascinated by Vance’s ability to survive his circumstances.  He observes the behavior of others that he sees at school and other places in his town and discovers at a young age that not everyone lives like his family and he wants to find that other way of life for himself.  He begins to realize there are circumstances to the choices he and his family members make and after graduating from high school he joins the Marines where structure, regular exercise and a healthy diet become part of his daily routine.  He pushes himself in ways he never thought possible and learns a lot about his potential by taking care of himself in a way he never did before.

There are times in the book where Vance becomes a bit strident when trying to explain why his hillbilly culture continues to be passed from one generation to the next with no end in sight but I took that as part of his respect for those he cares about and for his determination to reveal a way of life in America that is often dismissed or forgotten about.

Vance may not have control over the circumstances of his life but he develops a resilient way of finding the positives in his life and holding on to them so that he may achieve a healthier way of life.

Hillbilly Elegy is a thought provoking story that stays with you long after you have finished reading it.