I write about the great American singer songwriter Johnny Cash today for two reasons: the first is it’s his birthday and if he were still here with us he would be 82 years old (Happy Birthday Johnny!) and the second is his infamous “to do” list.
Cash’s iconic songwriting talents crossed over into so many different kinds of music that he is one of the few people to have been inducted into the Country Music Hall of Fame, the Rock and Roll Music Hall of Fame and the Gospel Music Hall of Fame.  Incredible right?
Cash’s most powerful songs to me are “Ring of Fire,” “I Walk The Line,” and of course, “Folsom Prison Blues.”  All three resonate with themes of pain, redemption and love and reflect Cash’s tumultuous yet successful and award winning life as a musician that was also sadly marked by his brother’s childhood death, drug abuse and divorce.

So with all that Johnny Cash had going on in his life, you might think his To Do list would reveal the secrets to what inspired him.  You might expect to see a To Do List that says things like “Call My Agent,” “Lunch with George Jones,” “Must Write Lyrics to New Song,” or “Rehearse for Upcoming Tour.”  I would have figured that the guy is a big time celebrity and the stuff that he reminds himself that he has to do is going to reflect that right?  But it doesn’t.

Cash’s list is worth reading because it appears he used it as a tool for him, a healing tool that helped him take the next step.  I can relate to the whole idea of list making as a way to put life’s priorities in focus.  If you have any doubt about what Cash’s priorities were, look at what he puts at the top of the list.  Don’t Smoke.  His health.  He is trying to fight that awful nicotine monster just like any other ordinary person.It just goes to show that sometimes public people have simple needs and desires just like anyone else and that the things he worried about or tried to keep under control are the very same things we think about or worry about, such as not eating too much.  In other words, I think Cash felt life might not always be fair in the habits you have to fight but it’s still damn good!!
Unfortunately, Johnny Cash died in 2003, less than four months after his second wife, June Carter Cash died.  Cash writes about his list in the autobiography that he wrote titled, “Cash: An American Man” and when the original of this list went up for auction, someone paid over $6000 for it.
I love #2 and #3 and #9!What’s on your To Do list today? 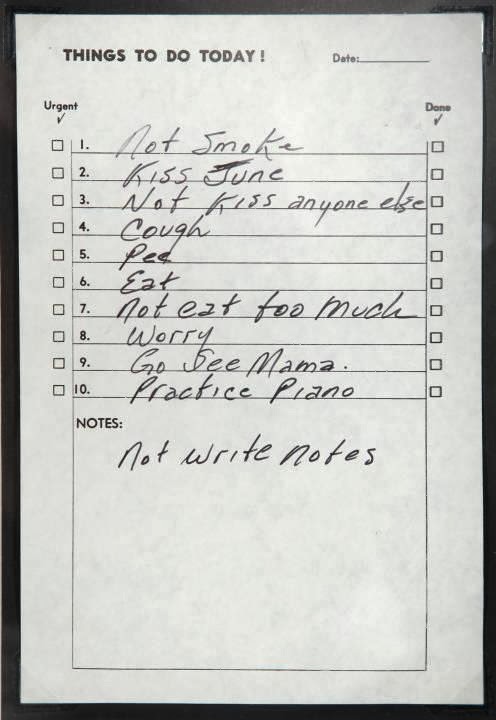 Peace Is The Way