Tommy Caldwell and Kevin Jorgeson, the two men who courageously completed the historic climb up El Capitan in Yosemite National Park in California on Wednesday, were the topic of animated conversation yesterday in my office.

People were wondering how they did it (can you believe it?), what kind of stamina it took to finish the climb (Dude you would have to be in incredible shape right?) and what your fingers would look like at the end of the climb (Totally bloody!).  This topic then lead people to talk about other people who practice extreme sports including some guy who wears something called a squirrel suit who jumps off towers or buildings.

Anywho, you might think it’s weird that I’m writing about this today but please stay with me.

Caldwell and Jorgeson fascinate me and other people around the globe because they did something no one else has ever done. They were the first to “free climb” the 3,000 foot vertical wall on El Capitan, a rock formation that’s called Dawn’s Wall. 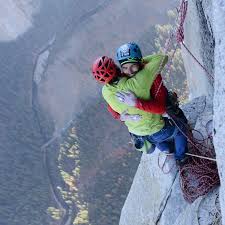 Tommy Caldwell, left, and Kevin Jorgeson, congratulate each other on their historic climb. Photo Courtesy of news.nationalgeographic.com

And that takes commitment.  And focus.  And an amazing amount of perseverance.

Caldwell and Jorgeson are inspirational.  I mean, my God, these two guys spent 19 days on a sheer granite face with only a safety rope in case of a fall and who knows what their ropes were attached to.

I have no desire to rock climb but reading about their teamwork and their focus and their success was riveting.  Even if I were a lot younger and I were to try rock climbing, I could not imagine myself getting very far.

It takes something down deep within yourself to make yourself keep going when times are tough and it also helps to know that others believe and support you as Caldwell and Jorgeson’s friends and family enthusiastically did.

There have been times in my life when I wasn’t sure why something was happening and some of my first thoughts were to go out and get really trashed or to do something that would in the end be self-destructive but somehow I managed to stop myself by either calling a friend or talking to someone in my family.

Caldwell and Jorgeson succeeded together and so we can learn from their fabulous teamwork.

Very few of us ever get to where we want to go all on our own.

We get there by reaching out.

It’s In The Bag