There are some stories that I never expected to read in my lifetime.
The selling of The Washington Post is one of them.  When I saw the first tweet about this surprising event, I thought I had read it too fast and read the words completely wrong.  I had to go back and read it again a few times before I understood that it was a real story.
I just never in a million years thought the Graham family would sell the newspaper that they have owned for decades and generations.  To those of us who live here in Washington, DC, the Grahams are The Washington Post.
People are saying and writing that change is good and that selling The Washington Post to Amazon.com founder Jeff Bezos for $250 million means that the paper will survive and ultimately, thrive and grow. 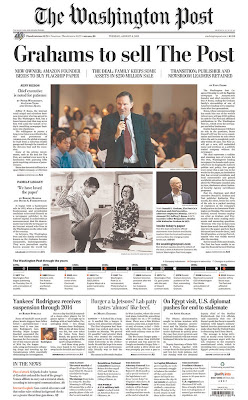 I sure hope so.  I was in sixth or seventh grade when I first started reading The Washington Post.  It was the first newspaper I ever read on a daily basis and even today I continue to have it delivered to my house.  For 20 years, my late husband reported and wrote for The Washington Post and we talked a lot about the crazy, fascinating and annoying things that routinely happened in the newsroom.  The newspaper felt as if it was a part of our family.
But whether I like it or not, families change just as many other things in life.  Change is part of life and that’s all there is to it.  While the news of The Washington Post being sold is sad and it brought back lots of memories about my husband and the time he spent diligently and creatively working there, no one knows what the next chapter is for The Washington Post.
Sometimes as we pass through sad times or even painful times we move into unexpected events, events that we never thought would happen; events that turn out to be positive and good.  But those good things would never have visited us unless we had the pain first and so whatever happens after the pain sometimes feels bittersweet.
I hope Jeff Bezos knows the tremendous power of what he bought and treats it with respect.  We as a community at large are hungry for daily independently reported and written information about what is going on around the globe.Who knows if The Washington Post will even exist a year from now but I really hope that it stays around because opening the front door every morning to read what has been thrown onto my front lawn is a critical tool for understanding and dialogue and it will always pique my curiosity.
Share this post: