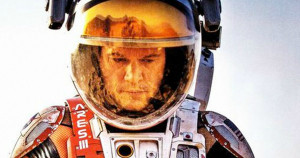 Actor Matt Damon Plays An Astronaut In the newly released movie, The Martian

My 25-year-old son went to see the new Matt Damon movie, The Martian, the other night and he was telling me that he enjoyed it a lot because it made him think about his deceased father.

The Martian is a new movie about an astronaut who is mistakenly left on Mars, presumed to be dead after a fierce storm.  It’s a warm science fiction, adventure techie kind of movie that pokes fun at the geekier side of life.

Beau Biden and his family:                                                 Wife Hallie Biden (Left) Daughter Natalie (Middle) and Son Hunter (Right).                                                 Special to The News Journal/SAQUAN STIMPSON Dearest Hallie: We have never met but my thoughts are with you this morning. Please accept my sincerest condolences upon the death of your beloved husband, Beau Biden.  His funeral this past Saturday was touching and heartbreaking and by allowing his Mass to be aired on television, you gave others the opportunity to grieve with you and also to draw strength from the open and emotional manner in which the Biden family gracefully handled the heartbreak of Beau’s… Read More
Today may be your first Memorial Day without a loved one. My heart goes out to you and your family as you try to process the overwhelming feelings of loss while also trying to figure out how to go on with your lives.  How can you make your way down this long, winding and sometimes brutal path?  It’s a path you do not want and yet, even as you try to reject it, you find it is one you are slowly learning to walk. ou may feel alone but you are not.  You are loved and many want to offer… Read More
Thank goodness that mothers come in all shapes, sizes, ages and cultures! There are all kinds of mothers, each healing and loving in their own way and trying to do what they think is best for their precious children.  Today we celebrate the many wondrous things our mothers do for us out of the goodness of their huge loving hearts. Everyone has some kind of a Mom: traditional, surrogate, birth mother, step mother and adopted mother.  No matter what the silly label, mothering a child is one of the most important jobs in the world.  I have loved every minute… Read More
Hi there Resilient Readers: I’ve been off the grid for a while and am happy to be back.  I needed to take a bit of break but I missed you A LOT and hope your life is currently full of some magical mixture of love, laughter and vibrant health. While I have been juggling some challenging issues affecting my family and friends, it has pushed me into having some spirited conversations and lots of quiet thought about what really makes life go ’round. I think it pretty much comes down to five things, and for me, the following five things… Read More
Hey there! It’s Monday morning already! Wherever did the weekend go?  It’s not as if I didn’t make myself productive because I did.  It just amazes me the speed with which Saturday and Sunday seems to fly by. I did learn something new this weekend that I would love to share with you.  During my yoga class on Saturday morning, my teacher talked about how doing new things makes our brain smarter.  Okay maybe you already knew this but I didn’t so please indulge me a bit because I think this is really interesting. Now I’m not a scientist, and… Read More
If you never take the opportunity to challenge yourself, then you might not really be sure of what you are capable of accomplishing in your precious life. Yesterday I was reading through some materials about resilience and I found the inspiring quote below. It blew me away when I first read it.  What a powerful thought!! I am going to tuck this wonderful thought into my brain and bring it out the next time I find myself facing a daunting task (probably today!!). More importantly, this thought is also for anyone who is facing a trying time.  Please let this… Read More
There are times when I read something that clarifies an issue for me or it helps me connect the dots of information I have spread about in my brain and when this happens I want to share it for the information might also be a great resource for you too! In this case, it is an incredibly insightful piece that I read in this past Sunday’s New York Times.  It is written by Patrick O’Malley, a psychotherapist from Fort Worth, Texas, and his opinion piece addresses why people tend to grieve the way they think others want them to grieve,… Read More
We are deep into the season of celebrating the holidays and messages of merriness are everywhere. Photo Courtesy of Huffington Post But what happens to teenagers when they are trying to cope with school and social pressures and then the parent of one of their friends dies? Or someone in their family dies? Adults are busy tending to shopping, decorating, cooking and organizing so it could be fairly easy to miss that the teenagers in your life might be having some difficulties at this time of year.  Are they spending a little bit more time by themselves or are they… Read More