Television doesn’t always get it right when trying to show the raw emotional effects a person experiences after learning of a death but Sunday’s night’s episode of The Good Wife came very close.
As is true in real life and acted in The Good Wife, everything instantly changes as each character finds out that attorney Will Gardner (Josh Charles) has been shot in a courtroom shootout and killed by his own client: the look on a person’s face, the tone of their voice, the way they carry themselves.  Something gets turned off.  There is a dazed and dull feeling after being jolted with the sad news about Will.
The changes are especially dramatic for Alicia Florrek, who is sensitively played by the wonderful actress Julianna Margulies.  When Alicia is told at a high profile public appearance that there is a telephone call she must take, she is hesitant to take the phone.  As the shocking news of Will’s death is tearfully delivered to her, Alicia says the sentence that I have heard so many people say and it’s a sentence I have found myself saying when receiving the news of a person’s death: “But I just saw him yesterday.”
Or I just saw them an hour ago.  Or I just spoke with them.  Or I just had lunch with them.
It’s as if the act of just seeing, speaking or eating with a person is a kind of shield that protects them from death.  I know that’s not the case.  It’s illogical.  But I think it’s human nature to blurt out that they couldn’t possibly be dead because you just had contact with them.  It’s just not possible you say to yourself as you try to wrap your brain around the unthinkable news. 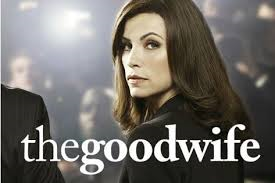 What does active grieving look like?  After every person on The Good Wife receives the tragic news about Will, you then see they are focused on holding on to anything relating Will: a memory, a conversation, any information about what he said in his last minutes alive.  No one wants the connection to be broken, no one wants to deal with the idea that they will never see Will again.  Alicia goes to the courtroom to talk to the judge and to see the crime scene.  She needs to know what happened to Will in the most graphic way possible.
But this is the thing about death.  Even though your mind knows that the person is dead, you continue to imagine seeing that person appear before you wherever you may go and this is also what happens to Alicia in The Good Wife.  She leaves the courtroom and goes to the hospital where Will was brought after he was shot and as she stands at the nurse’s station she sees Will smiling, making a joke and talking to her.  These kind of imaginary sightings really happen in real life too.
She flashes back to different conversations that she and Will had; conversations that reflect their complicated relationship of being lovers and ex-colleagues of the same law firm.  Alicia recalls Will’s anger when he found out that she was starting her own law firm and he then accuses her of stealing his clients.
If only she could have one more conversation with him, then they could have straightened everything out.  Everyone always wants to have one more chance to talk to the beloved friend, spouse, child or friend and Alicia also longs to hear Will’s voice.  She checks her phone and then discovers a voice mail from Will left on her phone that was recorded before the shots were fired in the courtroom.  She carefully plays the voice mail over and over, listening to his voice and taking in each of his words. The voicemail is a part of him and she doesn’t want to let it go because if she does then it will be true that Will is dead and that is too much for her to bear.
Too painful to think about.  Too confusing.
Alicia’s journey is just starting.
Share this post:

What Would Nana Do?