Knowing that I have at least one person in my corner, always supporting me as a true friend, makes life feel less scary and full of many more possibilities.I can almost bear anything if I know my friends are holding my hands and understanding what I am trying to do and say.Friends for life, friends until the very end, this is the unique gift that Patti Smith and Robert Mapplethorpe gave to each other.
“Just Kids” is a beautifully, beautifully written memoir by Smith.  You may know of Patti Smith from her infamous Horses album and also from her magical poetry.  In “Just Kids,” Smith’s writing is intimate and she instantly makes you feel a part of her life.  She takes us back to her childhood when she first met Robert Mapplethorpe and then continues with their close friendship as young adults which then evolves into a romantic relationship and then goes back again to a friendship in the last years of Mapplethorpe’s life. 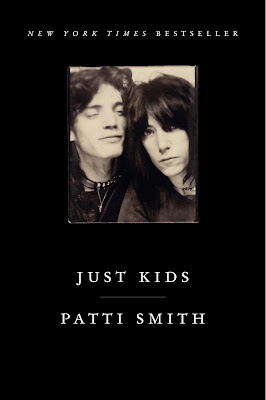 Mapplethorpe became an infamous photographer who triggered a highly charged public dialogue in the 1970s and 1980’s about the public funding of controversial works of art.  Mapplethorpe’s stark black and white photographs included celebrities, flowers but it was his explicit photographs of nude men that caused a furor in the art world.

“Just Kids” is also about New York City in the late 1960’s and 1970’s when Smith and Robert Mapplethorpe were literally starving artists sleeping in parks and doorsteps and then living in the hip Chelsea Hotel, hanging out with Andy Warhol’s entourage while Smith and Mapplethorpe experimented and developed their counterculture lifestyles and artistic talents.

I write about “Just Kids” not because of  the sensational nature of Mapplethorpe’s photography but for the touching human story of their unusual friendship and for the kindness and constant support they each showed to the other during good times and bad. In particular, Smith’s compassion to Mapplethorpe as he lay dying of AIDS is particularly poignant.Thankfully, Smith comforts us in “Just Kids” by sharing a few pieces of her crystalline poetry.  Here is one of my favorites:
Wild Leaves
By Patti Smith
Wild leaves are falling
Falling to the ground
Every leaf a moment
A light upon the crown
That we’ll all be wearing
In a time unbound
And Wild leaves are falling
Falling to the ground
Every word that’s spoken
Every word decreed
Every spell that’s broken
Every golden deed
All the parts we’re playing
Binding as the reed
And wild leaves are falling
Wild wild leaves
The spirits that are mentioned
The myths that have been shorn
Everything we’ve been through
And the colors worn
Every chasm entered
Every story wound
And wild leaves are falling
Falling to the ground
As the campfire’s burning
As the fire ignites
All the moments turning
In the stormy bright
Well enough the churning’
Well enough believe
The coming and the going
Wild wild leaves
Share this post: