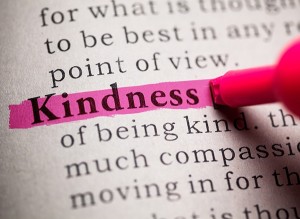 I find it helpful to plunge into a new work week by thinking about something positive or fun that may have happened to me over the weekend and those good feelings can help carry me through Monday.

Something I will be thinking about today was an act of kindness that happened over the weekend from a person I hardly know.

I was at a new yoga class on Saturday and while we were rolling up our mats after a peaceful session, some of us began to talk about Pope Francis and his historic visit to Washington, DC this week. We noted that it will be an unexpected week of holiness because while Pope Francis will be visiting the White House and saying Mass for thousands of people, Yom Kippur, the Jewish day of atonement, will also be happening.

One woman excitedly told us about she will be going to the Mass and how she received a surprise invitation and ticket from her close friends to attend Pope Francis’ Mass at the National Shrine of the Immaculate Conception.  While attending such an event is considered to be a once-in-a-lifetime moment, we immediately asked her how she was going to get there because there have been lots of news stories about the expected crowds taking Metro and how tight the security is going to be.

She was unfazed by any of the unusual circumstances surrounding the event and instead was excited by the idea of hearing Pope Francis say Mass.  She did agree with us about the traffic gridlock and the security checks but then she added that when she attends the Mass she will be thinking of her family and friends and offering prayers and good thoughts for all, including everyone she knows at her yoga class.

“Oh yes, you are my friends too and I will be offering prayers to Pope Francis for everyone here that I know in this class,” she said.  And I know that she was sincere about doing this because of the quiet and matter-of-fact way she said it.  As though it was a normal thing to pray and offer good will to those you don’t know.

I was touched by the simplicity and kindness of her spirit.

The idea that she would be thinking of us along with her family and friends was unexpected and simply a wonderful human gesture of caring.

Kindness is a powerful thing, feeding our souls and helping us see that life can be softer.

Keeping Love In Your Heart

Call Me Maybe — Girls on 9 Edition